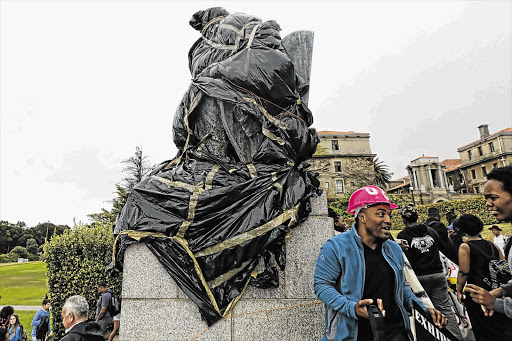 IT'S A WRAP: Cecil John Rhodes' statue at UCT, which is at the centre of controversy
Image: ADRIAN DE KOCK

Emotions ran high yesterday over the statue of Cecil John Rhodes at the University of Cape Town as the president of the students' representative council, walked out of a seminar, followed by senior staff and half the audience.

"We can no longer breathe. The winds of change are blowing through UCT," Ramabina Mahapa declared before walking out.

One of the four panellists also walked out.

The protestors said the time for debating was over, and draped banners over the walls while chanting: "We want a date" [for the statue's removal].

The seminar, according to deputy vice-chancellor Crain Soudien, was meant to discuss and debate "the very topics of transformation that had dogged the university".

The walkout was described by one academic as "a turning point in the politics of power [on] campus".

Soudien opened the seminar on historical symbolism by saying: "The events of the past week cannot be taken out of the equation but it is crucial that we leave this meeting with confidence of what a university is all about - a space that is fundamentally about position, counter-position, argument and counter-argument."

Mahapa responded by saying: "We're not able to identify with the symbolism on campus because it celebrates white supremacists.

The walkout led to a short and heated discussion about transformation at the university, and whether the seminar should continue.

University management was accused of "having security guards at hand to intimidate the students" and "failing to embrace transformation by making sure the university was a very alienating place for any person of colour whether they were staff or students".

Jacques Rousseau, a lecturer in critical thinking, said the walkout by a portion of the audience did not render the seminar "illegitimate" and it should continue.

It was later, however, decided to end it.

One academic, who did not want to be named, said for at least a decade SRCs at the university had been "cosy" with management, and that yesterday's events were a turning point in the politics of power on the campus.

There are mixed views about Rhodes statue among academic staff.

University historian Howard Phillips said: "Do we whitewash those parts of history we don't like or do we confront them?

"A university is all about addressing problems in a refined rather than crude way, and simply removing the statue rather than contextualising it is crude."

But Xolela Mangcu, associate professor in sociology, said: "UCT cannot continue to venerate the architect of colonialism. As Cape prime minister in the 1890s, he laid the template for the native reserves, pass laws, Bantu education and the disenfranchisement of black people. His racist utterances about black people as inferior would make Hendrik Verwoerd sound like a saint."

On those grounds, he felt it would be appropriate to remove the statue.

Heritage specialist Sally Titustad, who was meant to speak on the panel but endorsed the decision to end the seminar after the walkout, said: "There would need to be a heritage impact assessment for a protected piece of property with public participation because there are so many people who deserve to have a say.

"People could be charged under the Heritage Act if they removed it without due process."

Vice-chancellor Max Price said the statue represented "colonial history and imperialism for most people on campus, not just black students but also Afrikaner students and other white students".

He said a special council meeting had been set for May 20, and that "leading up to that, we have a series of processes planned to make sure everyone is heard on the issue".