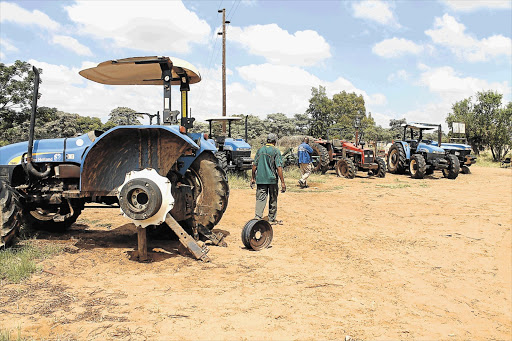 BROKEN PROMISES: About 32 tractor drivers in Mpumalanga have been forced to dip into their own pockets to repair their state-provided vehicles so that they can work and get paid.
Image: JUDAS HLONGWANE

A R500-million project intended to help emerging black farmers is on the brink of collapse.

President Jacob Zuma handed over 85 new tractors to the Masibuyele Emasimini (back to the fields) project in Mpumalanga and KwaZulu-Natal in June 2010 to encourage small-scale farming.

But, in Mpumalanga, of the 32 new tractors allocated to the DrJS Moroka municipality only six are still running.

The rest are idle because of lack of maintenance.

Tractor drivers in Machiding, who battle to get diesel fuel and broken tractors repaired, went on strike early this month because, they say, they have not been paid.

In Mmametlhake and Marapyane, more than 30 farmers missed planting 65ha of sunflower seeds this season because 17 of the tractors allocated to their area were either broken or did not have fuel.

The African Farmers' Association of SA said a total of 185000ha of once-productive, redistributed land in KwaZulu-Natal was standing idle as farmers waited to benefit from the project.

The government has proposed that commercial farmers give half of their farm land to workers and wants to limit individual ownership of land to 12000ha.

The neglect of agricultural colleges was raised in parliament and acknowledged by Agriculture, Forestry and Fisheries Minister Senzeni Zokwana.

A member of parliament's portfolio committee on agriculture, forestry and fisheries, Annette Steyn, said the state of the agricultural colleges did not augur well for the government's ambitious plans to support emerging black farmers.

Emerging farmer Abios Maloka said 25ha of maize went to waste last season because the fields had not been ploughed in time .

"Instead of assisting farmers, [the programme] brought devastation and hopelessness. Before, we would plan in advance to get the fields ploughed but we were given a false sense of hope. Now we are sitting with heaps of fertiliser and seed that has not been used."

Job Mthombeni, president of the African Farmers' Association of SA in Mpumalanga, said the association had told the government of its concerns.

He said at first the project ran efficiently, with the shortage of tractors being the only shortcoming.

Then, in November, the Department of Agriculture, Forestry and Fisheries took over the management of the programme.

"Since then we started getting complaints about tractors breaking down, not ploughing in time for planting and drivers not getting paid," he said.

The association's president in KwaZulu-Natal, Mandla Mthembu, said the tractors should have been given to farmers and not to the provincial departments.

Department spokesman Bheki Nyathikazi did not respond to questions.

He said he was encouraged by signs of political willingness to deal with the situation.

According to the 20-year review on land reform released by the Presidency in November, 7.5million hectares of land had been acquired through restitution and about 1.5million hectares had been redistributed to claimants. The project was to have benefited at least 10500 farmers and is linked to the UN's Millennium Development Goals to halve worldwide poverty by this year.