Three important lessons the #FeesMustFall movement has taught the world 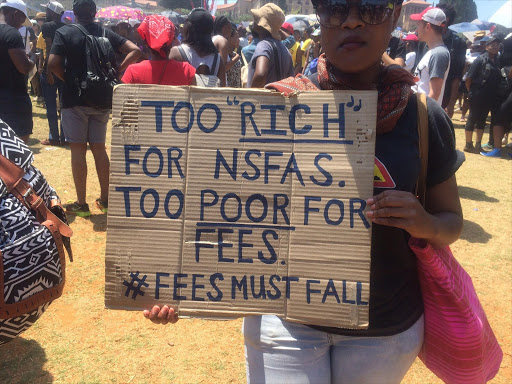 Students from South Africa's universities converged on the Union Buildings in Pretoria in support of the #FeesMustFall movement. File photo
Image: Mmalegong Ramutloa

The tens of thousands of university students across the country who came together over the past two weeks for a united cause have taught the world three important lessons about having a successful protest, an academic says.

According to University of KwaZulu-Natal Professor Patrick Bond, those three lessons are: make alliances, expand your geographical vision, and choose national targets.

Bond, who is also a director at the Centre for Civil Society at the university, said these three innovations by the students had made their protests successful and could work in any protest movement.

He said the #FeesMustFall movement had been deeply inspiring and a historical moment in South Africa's history.

"This is a sort of world historic moment that I think we're in, the defeat of apartheid in the early 90s, the defeat of the Aids medicines access in the early 2000s and now coming into 2015, this extraordinary show of force where tens of thousands of students can make their voice heard in these different cities and in this quite co-ordinated way."

What looked like an internal protest between students and the respective institutions quickly became a force to be reckoned with when students decided to move into public spaces.

'Time for students to take a breather'

This soon escalated even wider, across cities and provincial boundaries.

"If you take the Union Buildings, and you go back a day and say Luthuli House and you go back one day and say Finance Minister Nhlanhla Nene's budget speech in Parliament... Those were three events in three cities which were not small insurgencies by one group of students. They were national. "These are not students protesting individually at their universities, they have hooked up with workers and secondly... These are kids who have enough confidence to take their case into the streets, and they clearly expect societal support, which they are getting.

"The third thing is they are going national in a co-ordinated way. Taking national targets. If you think about it, those three lessons can apply everywhere; social movement protests, labour protests [etc]," Bond said.

He, however, highlighted the danger that came with having a successful nationwide protest such as this.

"The danger is if you are in a movement and you win a short-term victory, there are two directions [you can go]. You either keep the momentum going or you lose your momentum, and it's very hard to maintain a stable situation.

"I would say this is a very interesting time for students to just take some time, a breather, not lose momentum but not get divided and conquered in a way that seems to be happening now."

Cracks in the movement

There appears to be an air of distrust and confusion which has created cracks within those involved in the #FeesMustFall campaign already. This comes after some Wits students claimed they no longer recognised the SRC leadership that led the movement.

This was revealed after scathing attacks on social media aimed at outgoing SRC president Shaeera Kalla and incoming president Nompendulo Mkatshwa, at the weekend, questioning their loyalty to the movement.

The pair, who are members of the Progressive Youth Alliance (PYA), were accused of being coerced by the organisation's national and provincial members to bringing the protests to an end after President Jacob Zuma agreed to students' demand that there be a 0% fee increase for the 2016 academic year.

The women admitted that they did attend a private PYA meeting, which was within their rights as members, but said they were still committed to the movement.