Mbeki: I stand by my Aids statements 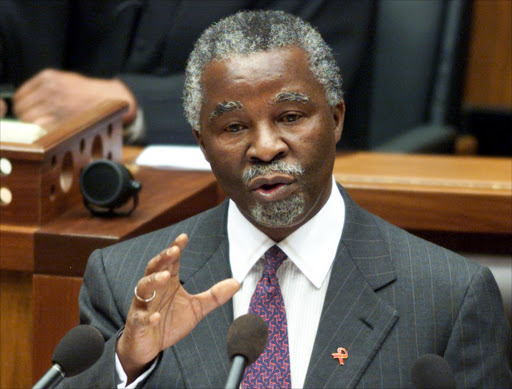 Thabo Mbeki’s alleged ‘aloofness’ and his antipathy towards debate are inextricably linked with his AIDS denialism.
Image: Reuters via The Conversation

In a salvo reminiscent of 2002, Thabo Mbeki yesterday warned people to take antiretroviral drugs with caution and to eat healthily as a way to treat HIV.

Between 1998 and 2004, former president Mbeki's Aids policies, which denied people access to antiretroviral treatment, were shown by Harvard researchers to have led to the deaths of more than 330000 South Africans.

Yesterday in his weekly letter aimed at setting the record straight about various issues during his time in office, Mbeki said: "I never said: 'HIV does not cause Aids.' This false accusation was made by people who benefited from trumpeting the slogan 'HIV causes Aids' as though this was a religious edict.

"What I said is that 'a virus cannot cause a syndrome'."

In his letter he again questioned the efficacy of (antiretrovirals) and spoke about the "the need to use antiretroviral drugs with great care and caution".

Health Minister Aaron Motsoaledi refused to comment on Mbeki's statement and would not respond directly to him. He said he and the SA National Aids Council encouraged people to keep on taking their antiretrovirals.

Motsoaledi said South Africa subscribed to the World Health Organisation's goals, which sought to have 90% of people infected with the virus on treatment, with 90% of those reaching viral suppression - meaning the virus is no longer replicating in their bodies.

But doctors and Aids activists reacted with outrage to the letter.

Mark Heywood, a founder of the Treatment Action Campaign that fought the government in court for treatment to prevent mother-to-child HIV transmission said Mbeki was "politically discredited". Heywood said: "His letter today has done nothing to repair his reputation. Instead, it has really reopened old wounds by his continued defiance of scientific and public opinion.

"I think if Mbeki was serious he should address the accusations against him directly. He should respond to the contention that he contributed to over 300000 deaths by delaying the roll-out of ARV treatment or that he caused the government to waste time and money having to go to court over mother-to-child transmission."

In his letter yesterday Mbeki said his views had not changed.

"Thirteen years later, today, I would stand by everything said in this excerpt and still ask that the questions posed should be answered by those who have the scientific capacity to do so!"

During his term of office, Mbeki restricted the use of donated Nevirapine, which stopped mothers passing on the virus to their babies and blocked funds for more than a year from the Global Fund to Fight Aids and Tuberculosis and Malaria. The delay in rolling out Nevirapine led to 35000 children being born HIV-positive, said Harvard researchers.

Francois Venter, former president of the SA HIV Clinicians Society called for Mbeki to apologise for the role he played leading to so many deaths.

"Mbeki's letter is a sickening reminder of one of our worst periods in post-apartheid history. He actively presided over the avoidable and often painful death of hundreds of thousands of South Africans ... We now have people getting old on antiretroviral therapy, families living normal lives, fewer new infections, and an increase in life expectancy.

"He should be apologising to the nation, not trying to rewrite science, medicine and history."

TAC general secretary Anele Yawa said: "Mbeki's letter is an insult to everyone in South Africa who has been affected by HIV-Aids. He shows absolutely no remorse for his role.

"The devastating impact of Mbeki's Aids denialism can also be seen in South Africa's life-expectancy figures. On Mbeki's watch life expectancy dropped to 53.5 in 2005. It has since recovered to 62.5 in 2015.

"This increase in life expectancy and the accompanying reduction in the death rate is widely accepted to be as a result of the roll-out of antiretroviral therapy.

The roll-out of ARVs only gathered significant momentum after Mbeki and his health minister Manto Tshabalala-Msimang were removed from office."