He said, she said: Force Thuli to presidency

People around the world are fishing for new presidents right now. And those who aren't probably should be. 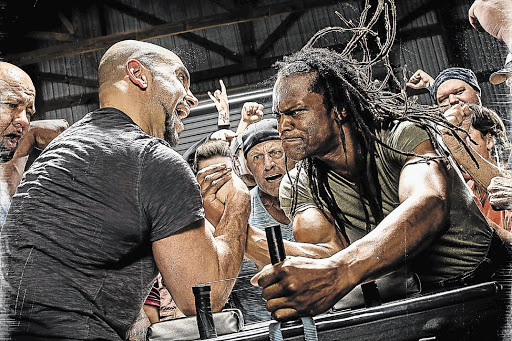 What do real men want from their president ... all international disputes to be resolved through arm-wrestling. From 'Game of Arms', an American television reality television show about competitive arm wrestlers.
Image: AMC NETWORKS

People around the world are fishing for new presidents right now. And those who aren't probably should be. I'm looking at you Zimbabwe. So co-writer Jason Mykl Snyman and I decided to play a little round of one of our favourite games, Fantasy President. If we could vote in anyone, who would it be?

For it to be a free and fair election, she'd have to run against someone. Oh my word, imagine a presidential race where both parties were good options? Just kidding, that's not possible, this is a fantasy remember. How about American comedian Tina Fey for Thuli's opposition? I think she'd make a phenomenal president. Everybody knows God's got a sick sense of humour and it's worked perfectly for him/her so far, so why shouldn't it work for a president too?

Of course Tina's not South African, but if America can have an African-American, why can't we have an American in Africa?

So as not to be labelled sexist, let me offer up a few male candidates too. How about American actor Liev Schreiber? Or South African actor Maps Maponyane? But only if they keep their shirts off throughout their term of office. I reckon being a president is mostly just acting, anyway. Take Jacob Zuma, for example, he's been acting like a fool for years.

And saving the best for last, the final Fantasy Presidential candidate I'd like to propose would be Archbishop Desmond Tutu. He's compassionate, trustworthy, politically aware, and he has a great sense of humour. We'd just need to invent a time machine and send him back to his early 50s. And while we've got the machine up and running, will someone go back and give Donald Trump a monster wedgie and a sexually transmitted disease. Thanks.

Watching the news on the US election these days is like watching a figure skater fall. It's great. I watch the US elections more than our own, because other people's problems always seem a lot funnier than mine. In fact, this year I didn't even vote.

Democracy, now, is only being allowed to vote for the party you dislike the least. Much like the US - we're in sore need of a hero, with none on the horizon. This year I thought it would be a lot smarter to just not bother at all. I know, I know. bad people are elected by good citizens who do not vote, and the penalty for refusing to participate is to end up being governed by your inferiors. So much for being a smarty-pants.

''Because it would be hilarious," probably isn't a good reason to elect someone as president. Politicians are a lot like diapers, they both need changing regularly, and for the same reason, but I don't think we should elect a next president at all.

Lately I've been wondering how bad four years without one could possibly be? What if we all just promised to be cool? I think we need to be single for a few years and find ourselves, and when we're all done with our silly "curious" phase - it's time to vote in the manliest, most badass guy we can find.

So, what do real men want from a President?

We think rainy days should be mandatory work-from-home days and pants should be absolutely outlawed. The Pres should rock a champion beard, of course, and we want public beer fountains. All international disputes are to be resolved through arm-wrestling. I want to see a pride of lions roaming around the Union Buildings gardens, I'm tired of watching children drag their flightless kites up and down the lawn, getting the strings all tangled in the bushes. If Theodore Roosevelt could keep a pet lion in the White House then so can we. Get it together, South Africa. We're the toughest country in the world. We need tough leaders.

E-mail us if there are any topics you'd like to hear about from a She Said/He Said point of view: amillionmilesfromnormal@gmail.com