Vaseline or a bribe? How did Ananias Mathe escape from C-Max Prison? 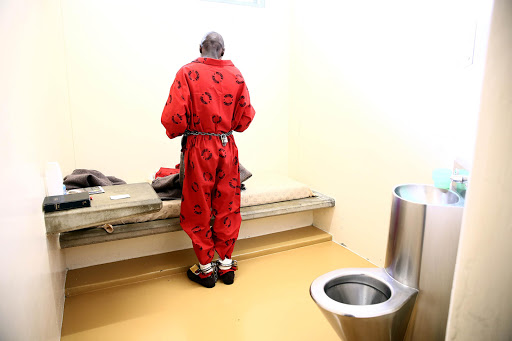 Houdini-like serial rapist‚ robber and murderer Ananias Mathe is famous for reportedly rubbing petroleum jelly all over his body to slip away from a high-security prison in Pretoria.

But did he? No‚ he paid a bribe‚ according to some reports at the time.

The Mozambican national died at King Edward VIII Hospital in Durban on Tuesday and‚ since then‚ social media has been awash with theories about how he escaped in 2006.

Many‚ including political parties‚ attributed his disappearing act to a generous quantity of Vaseline which helped him squeeze through a tiny gap in his cell.

Parliament’s correctional services committee rejected a report in 2007 by an investigating team – which included the former National Intelligence Agency‚ police and prison officials - that claimed Mathe had escaped by squeezing through the gap and running over the roof of the prison.

The Sowetan reported in 2009 that the Department of Correctional Services had fired six prison warders for helping Mathe to escape.

There are many unanswered questions about the daring escape‚ but this‚ according to the Sunday Times‚ is how he pulled it off.

Here‚ from our archives‚ is the story of his escape‚ published by the newspaper on December 10‚ 2006:

South Africa’s most dangerous prisoner‚ Annanias Mathe‚ did not use Vaseline to slip out of the country’s high-security prison — he walked out after paying warders an R80 000 bribe .

When the money was handed over‚ warders unlocked the handcuffs and leg irons of the man who has been labelled by police as an “ultimate career criminal” and set him free from the C-Max Prison in Pretoria on November 18.

At the time of Mathe’s escape‚ Correctional Services said that the small-built man had covered himself with Vaseline and slipped through a small window of his cell.

The Sunday Times has established that the bribe was paid to warders by four members of Mathe’s gang who had raised the money in the village of Xicumbane in the Xai Xai district of Mozambique where he lived with his two wives and five children.

Mathe is the boss of a cross-border crime syndicate‚ which operates from the village‚ 98km from Pafuri‚ the South African border post in the northeastern corner of Limpopo.

From there his militarised gang sets up raids into South Africa.

This week three more Correctional Services officials were suspended in connection with Mathe’s escape. Five others have already been suspended.

This week at the village‚ Mathe’s two wives‚ Filistra‚ 26‚ and Elizabeth‚ 24‚ said they knew their husband’s men had arranged the R80000 bribe .

The women said that before leaving Mozambique‚ the men had told them they would get Mathe out.

Three days later they were back and said Mathe would soon be home on a bus from Johannesburg.

But Mathe was unable to catch that bus because all border posts had been alerted and there was a massive police hunt to find him.

This week the women said that members of his gang had again organised money and had left the village on Thursday for Pretoria so that they could pay another bribe to get him out of jail a third time.

They said they were now waiting for a call that would tell them that their husband was free.

The Sunday Times can today also reveal that Mathe‚ who was first arrested in January 2005 after allegedly shooting and injuring a traffic officer‚ also bribed his way out of a high-security cell at the Johannesburg Central prison. On that occasion his gang members had paid a policeman R15000 to enable Mathe to break out. An investigation into this escape has still not been completed.

After walking out of Johannesburg Central‚ Mathe went on a nine-month reign of terror through Gauteng‚ Limpopo‚ North West and the Free State.

During this crime spree he raped seven women in homes in Parkview and Sandton in Gauteng‚ Garsfon-tein in Tshwane‚ and Edenvale on the East Rand.

In an attack in Parkview he shot a woman as he walked through the door of her home.

He once cut the pants off a woman he had tried to rape‚ but she and a friend escaped and locked themselves in a room.

Mathe poisoned the dogs of his victims by spiking corned beef with a pesticide called Aldicarb. He then broke into their homes.

He hit one house after another in the same suburb night after night‚ terrorising inhabitants‚ and stealing cars‚ motorbikes‚ quad-bikes‚ cellphones‚ laptops and televisions.

On three consecutive nights during a crime spree in Limpopo he tormented residents of Thabazimbi‚ where he broke into 28 homes.

Senior Superintendent André Neethling‚ who has been on Mathe’s trail‚ said he was “very‚ very happy” that the elusive criminal had at last been caught.

“He has really terrorised people across the country. We saw the damage he did ... the pain he caused. Mathe’s life’s ambition is to be the best criminal possible. Mathe also works for some of South Africa’s most wanted syndicate leaders‚ who are sitting in Mozambique and are untouchable.”

Neethling said the Mozambican constitution prevented the extradition of any of its citizens.

The charges of attempted murder that Mathe faces are in connection with allegations of shooting a traffic officer‚ shooting at a woman who fought back when he tried to rape her‚ and for shooting a man who had tried to prevent him from raping the man’s wife.

In Gauteng‚ he attacked residents in Alberton and Edenvale‚ and Roodepoort on the West Rand.

In Roodepoort‚ he allegedly broke into a home where two women lived and sexually assaulted them.

In North West‚ he struck in Rustenburg‚ Lichtenburg and Hartbeespoort.

In the Free State‚ he robbed people in Welkom and Kroonstad.

On Friday‚ Correctional Services spokesman Manelisi Wolela said the department had not ruled out the possibility that Mathe had bribed officials to get out of C-Max.

“He could not have escaped from C-Max without help from inside‚” said Wolela.

He said the special task team set up by the Minister of Correctional Services‚ Ngconde Balfour‚ to investigate how Mathe had escaped‚ had completed its report.

The team consists of members from National Intelligence‚ the South African Police Service and Correctional Services.

They interrogated Mathe this week after he had been brought back to C-Max.

Wolela said that after this interrogation‚ three more prison officials had been suspended‚ allegedly for their role in the escape. – TMG Digital