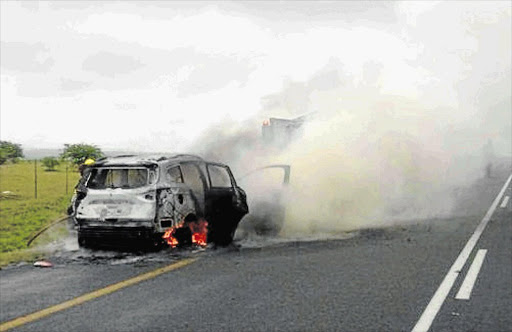 UP IN SMOKE: A Kuga on January 6 2017 on the R63 between King William’s Town and Dimbaza. File Photo
Image: FACEBOOK

More than 4‚500 Ford Kugas are being recalled for compulsory safety checks after 48 of the family SUVs burst into flames in South Africa and a motorist died while trapped inside his burning vehicle.

Mohamed said the safety recall was is in the best interests of consumers and added that it was regrettable that motorist Reshall Jimmy had lost his life in December 2015.

“This issue has dragged on for too long‚” he said.

Nemeth personally apologised for the fear that the burning vehicles had instilled in consumers. He confirmed that 4‚556 vehicles – with 1.6 litre engines manufactured between 2012 and 2014 – are affected by the safety recall.

Investigations had revealed that the fires were caused by overheating which led to engine cylinder heads cracking and oil leaking. Recalled vehicles will be subjected to a software update and a check on the cylinder head‚ he said.

Nemeth acknowledged that there may be part shortages and said that affected owners would be provided with courtesy cars.

He offered his condolences to the Jimmy family and added that while the investigation into that incident had not yet been concluded‚ Ford was of the view that it was a unique case unrelated to an engine fire.

The safety recall comes after a high level meeting was held on Friday between senior Ford executives and National Consumer Commission lawyers.

In December‚ after an expose by The Times‚ the commission summoned Ford's top management to appear before it to explain what the company was doing to investigate and stop the fires.

Ford was given until February 28 to complete its investigation and report back to the commission.

For months Ford has been under intense pressure over its Kuga‚ with customers asking why the vehicle manufacturer has not recalled the car.

To date 48 Kugas have caught alight in South Africa‚ 11 of them this month. Jimmy died in December 2015 when he was trapped in his burning Kuga while on holiday in the Wilderness‚ in the Western Cape.

Since then his family have been fighting a bitter war with Ford to get the company to take responsibility for his death.

While Ford claims that Jimmy's car caught alight in the rear‚ the family through private forensic and fire investigators‚ have established that the fire started with the car's electronic wiring system behind the dashboard on the passenger side of the vehicle.

Police‚ and Jimmy's insurance company's forensic investigators‚ came to the same conclusion as those made by fire experts hired by the Jimmy family.

Earlier today the Jimmy family through their lawyer‚ Rod Montano‚ handed over dozens of complaints from Kuga owners whose vehicles have caught fire to the National Consumer Commission.

The handover is part of the start of a class action against Ford‚ which the family is driving.

The Times today reported that since 2014‚ Ford has known of the Kuga's potentially deadly safety flaw‚ but have done nothing to address the matter.

The company was informed over the past two years by various insurance companies about the flaws through investigations by their forensic investigators.