IN PICTURES: From Doom to Rattex - 5 pastors turning Communion wine into noxious substances

Controversial South African pastors have made headlines around the world and what started as a congregation eating grass has in just two years escalated to congregants seemingly willingly taking sips of a Rattex concoction. 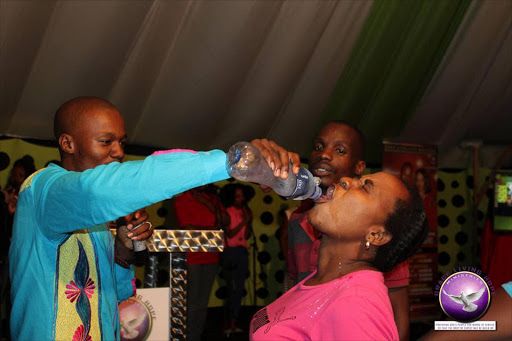 Pastors have really outdone one another in the name of healing and deliverance. Let's take a look at five infamous‚ "inventive" pastors:

2014 - Under the instruction of Pastor Lesego Daniel of Rabboni Centre Ministries‚ dozens of followers dropped to the floor to eat the grass at his ministry in Garankuwa‚ north of Pretoria‚ after being told it will "bring them closer to God".

Members of the Rabboni Centre Ministries, under 'miracle man' pastor Lesego Daniel, eat grass as part of a ritual to show that humans can be controlled by the spirit of God. Photo: Supplied

Mnguni was arrested after the Society for the Prevention of Cruelty to Animals laid charges against him for allegedly making congregants eat snakes. He was released after paying R1‚000 bail.

He later claimed to turn rocks into bread and snakes into chocolate‚ which he feeds to his congregation.

Pictures on the church's Facebook page showed members of the church consuming contents of a black bottle with words 'Formula A'. Contents in the bottle have been said to be that of an engine cleaning fluid.

February 2017 - Pastor Light Monyeki of the Grace Living Hope Ministries is the latest to introduce a bizarre method of healing. He has apparently taken a lead from nyaope smokers and been mixing Rattex with water and offering it to his congregants.