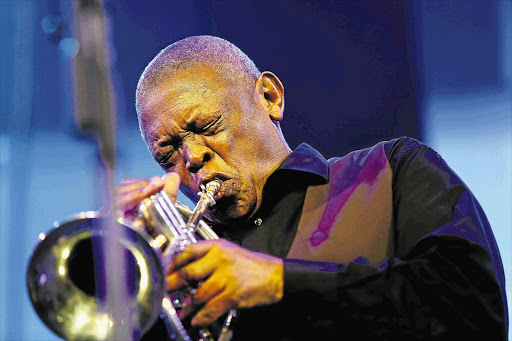 THE BEST KIND OF BLUE: Hugh Masekela will be performing at the Standard Bank Joy of Jazz, which is on until tomorrow at the Sandton Convention Centre

Globally renowned musician Hugh Masekela broke into song after he received an honorary doctorate at the University of KwaZulu-Natal on Monday afternoon.

Addressing students at the ceremony‚ Masekela‚ whose anti-apartheid anthem‚ "Bring home Nelson Mandela" in 1986 became a rallying cry around the world‚ urged students to "consider a number of issues in restoring the excellence of African heritage back into our lives without abandoning the best elements of what we inherited from the western world".

He called for a careful examination of the true history of our continent‚ the prioritisation of the study of mother tongues and a return to praise poetry as the universal geneaology of African people.

UKZN awarded him its highest honour‚ Doctor of Music (honoris causa)‚ in recognition of his contribution to the music industry.

After being capped by acting chancellor Professor Bala Pillay‚ the Grammy award winner joined the band on stage for a rousing rendition of Khawuleza‚ one of his popular songs which got the crowd singing and dancing.