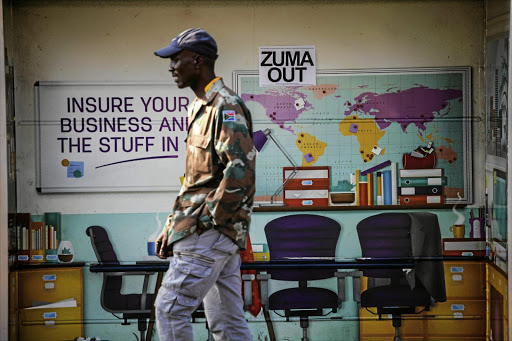 ASK THE MAN IN THE STREET: An advertising poster at a bus stop on Oxford Road, Johannesburg, to which a stark political message has been added
Image: ALAISTER RUSSELL

More than 600 "combat-ready" military veterans will be sent to Johannesburg from KwaZulu-Natal to defend President Jacob Zuma.

The Umkhonto weSizwe Military Veterans' Association in KwaZulu-Natal said yesterday it would defend Zuma "with our lives" if the Black Friday marches take place.

The chilling warning was issued by Themba Mavundla, the association's provincial chairman.

Mavundla did not mince his words at a press conference, saying the MKMVA would send 600 combat-ready soldiers to Luthuli House tomorrow to defend the ANC, Zuma and the party's national headquarters.

Asked if the MK had weapons, Mavundla refused to respond but indicated that the former military wing of the ANC was armed.

"We know how to defend the movement.

"We wish to warn these forces of darkness that our patience is not unlimited. Our people are ready to defend our hard-won gains."

Mavundla said no one should undermine the ANC.

"If they are coming to Luthuli House, we are ready for them. I know you understand a historical mission in situations like these.

"Let us rise up and defend our glorious movement with our lives. Let's arrest this political hooliganism in our political life.

"Let us thwart the counter-revolutionaries and turn their attempt into a complete rout. We must position ourselves at their rear and at their flanks," he said.

Mavundla, who is also the head of the provincial community safety and liaison department, said he was not speaking as a public servant but as commander of the MKMVA.

"I took an oath when I joined the MK. I put that [head of department position] on the side when I'm wearing this cap. I'm a commander of the MKMVA and it is my duty to defend the organisation," he said.

In Pretoria, Save SA, a coalition of civil society against Zuma, slammed the ANC government's opposition to the planned civil obedience protests tomorrow as "disingenuous".

Save SA supporters have been camping on Church Square, in front of the Treasury offices, since Monday and have vowed to stay put until Zuma quits.

Johannesburg Against Injustice, which is part of the campaign, said peaceful civil disobedience to exert pressure on the government was a constitutional right of civil society.

The organisation's Peggy Pillay said: "It was the modus operandi of the ANC as a mass democratic movement so it is disingenuous for the ANC government to be against civil obedience now".