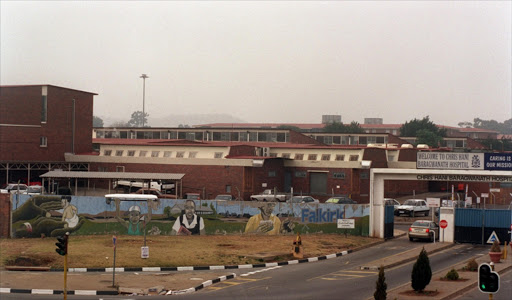 Gauteng’s health department has paid just over R1-billion in medical negligence claims in the past two-and-a-half years‚ mostly for babies born with brain damage at Chris Hani Baragwanath Hospital.

The full extent of medical negligence payments in the province was revealed on Tuesday by Gauteng health MEC Gwen Ramakgopa‚ in response to questions by Democratic Alliance MPL Jack Bloom.

The worst cases included a R4-million payout for a child subjected to an incorrect arm and leg amputation at Yusuf Dadoo Hospital.

"They talk about the cost of arm and a leg‚ well that is the price the court put on it‚" said Bloom. But he emphasised that payouts would never be enough to undo lifelong damage done to patients.

Money did not make up for the “agony and misery" faced by their families‚ he said.

In another case a baby was left brain-damaged after being dropped on its head at Natalspruit Hospital.

In a case at George Mukhari hospital a baby’s arm was cut during a C-section but she was kept from her mother for three days despite the desperate mother's pleas to see her child. The mom eventually found her baby screaming with hunger with an undressed wound three days later.

Only on the eighth day‚ were the baby’s wounds finally dressed properly. So as a result they took three months to heal.

The hospital paid almost R600‚000 to the mother who suffered complications following her C-section that were also not properly managed.

In one other incident‚ a baby suffered oxygen deprivation leading to severe brain damage after apparently not being checked on for about an hour and a half.

Bloom said that the Gauteng department of health currently had R13-billion worth of claims lodged against it - a third of its R40 billion annual health budget. This‚ he added‚ spoke to the fact that there were new cases of medical negligence all the time.

Of the 185 cases in which payouts had been made in the past two-and-a-half years‚ seven cases involved blindness caused by negligence.

Paraplegia was caused in three cases. In one case‚ a nurse left a cleaning pad inside a mother's womb at a hospital.

"This is the country's richest province‚" said Bloom. Medical negligence cases are probably even worse in the lesser resourced provinces‚ he said‚ but people did not know their rights or may not have lawyers to assist them.

Bloom pointed out that at South Africa’s biggest hospital‚ Chris Hani Baragwanath‚ babies were involved in a far higher number of payouts compared to other big hospitals that also had many births.

"Why is the Chris Hani Baragwanath Hospital number of payouts so much higher than the number of Charlotte Maxeke Academic Hospital payouts?" he asked.

"There is something drastically wrong at the maternity ward at that hospital.

"This needs to stop. What are you doing to stop this avalanche of cases?" he asked of the provincial health department.

"Hospitals should be where you go to get cured and not to get injured."

"It says to me there are state hospitals that largely get it right. They do things better. They are not injuring so many babies at birth‚" said Bloom.

What disciplinary action was taken in connection with these cases‚ he asked‚ quoting Gauteng MEC Gwen Ramakgopa: "She says none".

Of the new cases happening‚ Bloom said: "It is a catastrophe."

Health Minister Aaron Motsoaledi has previously noted that the National Department of Health had R48-billion in medico negligence claims lodged against it. That is a third of its annual budget of R181-million.