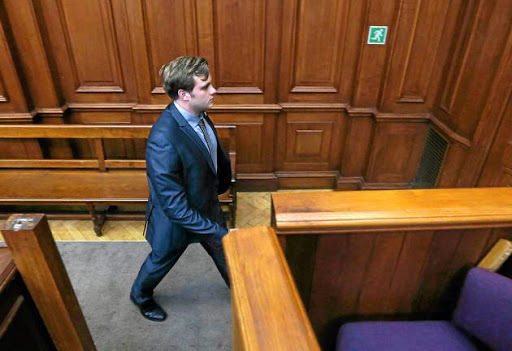 A ballistics expert in the De Zalze murder case has cast a major shadow of doubt over part of the accused Henri van Breda's plea statement.

Van Breda‚ the triple axe murder accused‚ claimed in his plea statement that after a scuffle with an intruder who laughed while slaughtering his family with an axe‚ he (Van Breda) had thrown the axe down the stairs after managing to grab it from the alleged attacker.

On Monday in the Cape Town High Court‚ however‚ Captain Candice Brown‚ a ballistics expert from the SAPS‚ said that an axe being thrown down the stairs appeared “possible but highly unlikely”.

Brown‚ testifying for the state‚ took the court through three impact and damage marks that were found on the walls inside 12 Goske Street at the luxury De Zalze estate in Stellenbosch where the horrific murders took place.

Van Breda's parents‚ Teresa and Martin‚ and his brother Rudi‚ lost their lives while his sister‚ Marli‚ clung to life for at least three hours and survived the ordeal.

Brown‚ who is based at the Plattekloof Laboratory‚ told the court how‚ on 27 January 2015‚ she was called to the scene of the murders where she was asked to do a crime scene examination after marks were found on the wall‚ and to take “scene photography” too in preparation for an analysis.

There were three deep markings on the wall – one on the top landing where the bodies were found‚ one on the middle landing of the staircase‚ and one near the front door of the house.

The one on the staircase showed signs of such great force that it had ripped a chunk of plaster and cement from the wall‚ exposing the brick beneath.

In his plea statement‚ Van Breda claimed that after a scuffle‚ “I saw the attacker near the middle landing by stairs. I am not a fast runner so I threw the axe at him. I did not see where or what the axe struck.”

According to Brown‚ however‚ when an axe is flying through the air‚ and Newton's laws of movement are applied‚ it is “highly unlikely” such a deep impact mark would have resulted.

It would have “decelerated in velocity and speed”‚ and “would only have had a quarter chance of hitting the plaster with the sharpened edge of the axe” (as it could also have hit on the top‚ the back‚ or the handle)‚ she said.

She added that‚ since the brick was exposed‚ the axe would have had to work its way through about 15mm of plaster first to expose the brick.

Also‚ she said‚ “what was ripped off the wall was reduced to powder marks and ended up as some particles on the landing – this is what happens when a greater impact force effect would cause an object to spatter into particles”.

State prosecutor Susan Galloway asked‚ “Would you describe it as a very hard blow?”

Brown said yes‚ and therefore one unlikely to be caused by an axe being thrown rather than held during the blow.

The case continues on Tuesday.