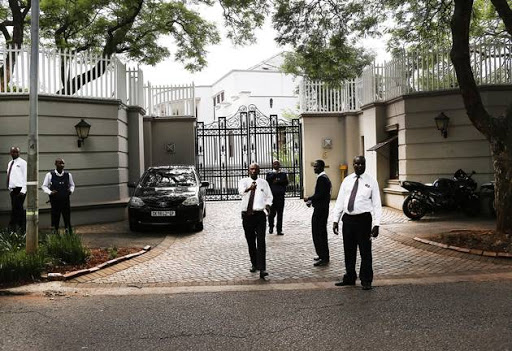 The Guptas e-mail appointment calendar shows that the family lined up a string of visits by top members of provincial and national governments.

A tranche of leaked e-mails dating back to 2012 reveals who was invited to visit them at their Saxonwold mansion and exactly when these visits occurred. They paint a picture of a family that wined and dined politicians in what is being widely taken as a bid to capture lucrative state business deals.

Many of the visitors have either denied impropriety, refused to comment or called their visits their own private business.

The Times can reveal that among the guests was President Jacob Zuma's former private secretary, Delsey Sithole.

The leaked e-mails show that she forwarded a guest list for a Jacob Zuma Foundation dinner to her own Gmail account and to the CE of Gupta-owned company Sahara, Ashu Chawla, in October 2012. She sent her son's CV to Tony Gupta, asking him to give him an internship in his company.

Yesterday she confirmed that she had sent the CV.

''I was no longer private secretary to the president in 2013. This was a request in good faith to a contact. It was not linked to any favours or expectations on his side."

The calendar appointments, which cement the veracity of the e-mails - which the Hawks are investigating - include mentions of visits to the Gupta mansion by the likes of former government spokesman Jimmy Manyi.

His response when questioned about the purpose of his visit was that he was no longer a member of the government and that what he did with his time and his CV "is none of your business".

Other visitors, according to the e-mails, included several provincial leaders, such as Free State Premier Ace Magashule and North West Premier Supra Mahumapelo.

North West provincial government spokesman Brian Setswambung did not deny that Mahumapelo had met the Guptas but would not comment on what the meeting was about.

Those the calendar shows planned to knock on the Guptas' front door also include current Mineral Resources Minister Mosebenzi Zwane, who paid them a visit while he was the Free State rural development and agriculture MEC.

His spokesman referred The Times to a post-cabinet statement urging all implicated in the revelations to co-operate with the law enforcement agencies investigating the e-mails.

Bapela did not deny the meetings and said he had been a friend of the Gupta family since 2001.

"We are still friends to this day."

Peter Thabethe, who headed the Free State department of agriculture and rural development, also visited the Guptas, once with his former boss, Zwane. His spokesmam, Zimasa Mbewu, said Thabethe was out of the country.

Elzabe Rockman, who was appointed Free State treasury MEC in March 2013, is also mentioned. Her spokesman referred The Times to this statement:

"The Free State premier has noted the so-called e-mail communications circulating. The relevant authorities, including the Hawks, have embarked on investigations intended to test the validity and authenticity of such e-mails.

"Until such investigations are concluded, the premier and the Free State provincial government shall not respond to enquiries."

Other visitors included Jacinto Rocha who, when deputy director-general of mining and mineral resources, in 2011, approved an application for iron ore prospecting rights involving reserves with an estimated value of R7-billion by Imperial Crown Trading.

Rocha, when approached for comment, said he had resigned from the mining ministry in February 2011 and at the time of visiting the Gupta family was a consultant in the mining industry.

Government ministers who have been shown to have had appointments with the Guptas include former communications minister Dina Pule, who visited the Guptas with Magashule in October 2012. She did not deny the meeting but refused to comment.

State-owned enterprises board members who had appointments to see the Guptas include former SA Airways board member Rajesh Naithani, former Eskom board member Romeo Kumalo and SABC deputy board chairman Thami ka Plaatjie.

Plaatjie and Naithani did not respond to questions.

Kumalo told The Times that the Guptas lobbied him to place advertising in The New Age newspaper when he was Vodacom's executive commercial director.