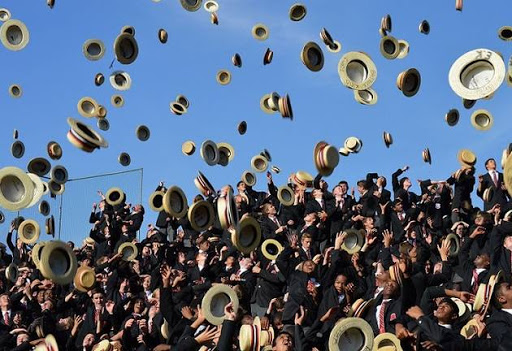 The students of Maritzburg College in Pietermaritzburg, KwaZulu-Natal, throw their bashes into the air after a try by their first rugby team.
Image: Adam Jinnah

A Maritzburg College prefect who used the k-word to refer to a peer during an argument may face fresh disciplinary action after the school waited nearly four months to report the incident to the provincial education department.

The incident‚ which played out in February‚ was only reported last week after a racist rant went viral at neighbouring Pietermaritzburg Girl’s College. And while race tensions continue to swirl‚ the department has intervened and is calling for an investigation into the matter to start from scratch.

Spokesperson Kwazi Mthethwa said that the delay in reporting the matter was puzzling.

“What we have picked up is that the principal only reported it to the district on Wednesday last week and it happened in February. We are asking ourselves why. He tells us that he thought he had handled it on his own‚" said Mthethwa.

He said that a department official delegated to probe the matter recommended that the investigation be reinstituted.

“The child was made to apologise to the victim and also to the parents of the victim‚ and we feel that the whole process was flawed and must start from scratch‚” he said.

It is understood that the senior prefect was suspended from his leadership roles for three weeks‚ apologised to the black learner and his parents and was ordered to do five weeks of community service at a local primary school.

“There is a no proof that any action was taken in whatever they have presented to the circuit manager. There is no evidence that a tribunal was held and a letter of suspension must be issued to the learner‚” Mthethwa said.

“Some of these parents don’t teach their children how to be racist but they grasp things very quickly‚ whether it is from friends or from TV. Some parents land up being equally shocked that their children act this way. Other parents will have to explain to us why their children have not been taught to conduct themselves‚” he said.

Maritzburg College headmaster Chris Luman could not be drawn to comment‚ saying he was not authorised to speak to the media.

“I would like to appeal to all Old Boys not to use social media to raise any concerns regarding Maritzburg College or the MCOBA [Old Boys Association]‚ it is not the correct forum to discuss issues‚” he wrote. “In future‚ please contact the MCOBA office‚ and I can assure you that all queries will be addressed. Let us all continue to support our great school‚ and thereby help future generations of Old Collegians gain a solid foundation on which to start the next chapter of their lives."