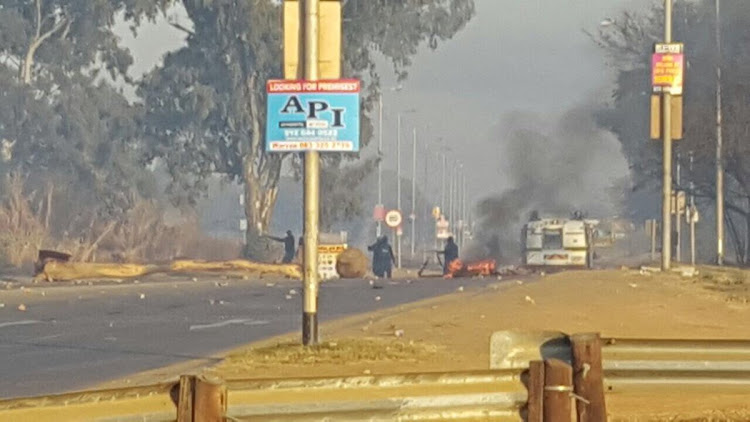 Several roads are closed due to protests in Pretoria.
Image: Ian Cameron via Twitter

A truck has been set alight and Van Der Hof Steet is closed in Pretoria West on Thursday morning after angry community members took to the streets.

Gauteng police spokesperson Colonel Lungelo Dlamini said residents from a nearby informal settlement are protesting in the area.

“Members of the informal settlement have blocked one of the roads. They burnt a truck but SAPS will be here to monitor the situation‚” Dlamini said.

In Lenasia South‚ another protest action is under way‚ affecting motorists travelling from Ennerdale and Orange Farm. The Golden Highway is affected as community members have covered the road with rocks and tyres.

JPMD spokesperson Wayne Minaar said: “The Golden Highway is affected by protest action this morning. This is affecting motorists coming from Ennerdale and Orange Farm heading into the city. Motorists should use the N1 as an alternative route. Rocks and tyres are on the roads. Officials are on the scene diverting traffic.”