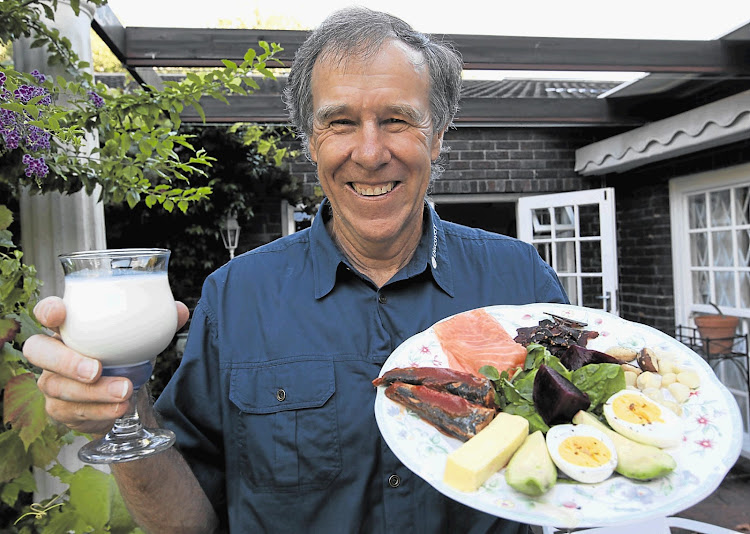 Low-carb‚ high-fat guru Tim Noakes has tweeted that common dietary guidelines will be “remembered in history as a genocide”.

Low-carbohydrate advocates‚ including Noakes and his colleagues‚ have long blamed dietary guidelines for the growing number of people suffering from obesity or diabetes worldwide.

One day this diagram will appear in museums recording histories of human genocides. https://t.co/VKfZMtwWBw

Most national dietary guidelines promote eating large amounts of fruit and vegetables‚ low amounts of saturated fat‚ moderate amounts of meat and many servings of carbohydrates.

The guidelines that Noakes referred to as “akin to genocide” promote a daily 8 glasses of water‚ 3-4 servings of fruit a day‚ 6-11 servings of unrefined carbohydrates‚ 2-3 servings of dairy and minimum use of fats. Some people following Noakes on Twitter were horrified that he compared the recommendations to the mass slaughter of ethnic groups.

Cape Town resident Sean Robinson tweeted: "You mean like the genocide in Rwanda‚ and the 2nd WW concentration camps? Wow."

@lusciousCTsaid: "Just stop with the hyperbole‚ please. You're going off the deep end now. Carbs cause genocide? Hogwash."

Is a high fat diet the key to a long life?

The high fat diet scores again over carbs‚ this time for longevity and strength.
Lifestyle
4 years ago

Dietician Megan Pentz-Kluyts‏ explained to Noakes on Twitter that the South African guidelines have changed‚ so the subject of Noakes' tweet was outdated. "Why does the [food] pyramid keep coming up? It has not been followed or recommended in South Africa nutrition circles for quite some time #oldnews"

Noakes argues that eating too many carbohydrates leads to insulin resistance and causes diabetes. There is a growing move in mainstream science which asserts that people can eat more fat than was formerly believed healthy‚ and Noakes is critical of people being forced to reduce fat intake.

Many critics of Noakes argue that national nutritional guidelines are not to blame for a growing number of diabetes cases and overweight people.

McAlpine believes that it is overly simplistic to blame the guidelines for obesity: "Obesity is complex and multi-factorial‚ and blaming a guideline that hardly anyone follows is simplistic and incorrect."

He added that the guideline does not promote unhealthy food‚ refined carbohydrates or excess sugar intake. "Furthermore‚ the guideline is clear that we should all reduce our refined sugar consumption. If Noakes has issues with bread and pasta‚ he should engage meaningfully rather than insultingly."

Fasting is a key part of Banting: Tim Noakes

The British Nutritional Foundation has pointed out that people don't follow guidelines when eating and buying food. Responding to a book written by Noakes' friend‚ British cardiologist Aseem Malhotra‚ that blames nutritional guidelines for unhealthy people‚ the Foundation said: "The issue is not that healthy eating dietary guidelines are wrong‚ but that people are not following them."

McAlpine pointed out that many societies in which many people live a very long time eat carbohydrates – such as the Japanese‚ for whom rice is a staple. "Humans are living longer than ever‚” he said. “There is simply no evidence of a ‘genocide’."

Some Twitter users agreed with Noakes‚ however‚ saying the food pyramid was "deadly".

Barry Pearson‏ tweeted: "That diagram is a weapon of mass destruction. If you want to destroy a nation's health‚ persuade them to adopt this guidelines."

Noakes has also said recently that one must eat meat to save the environment‚ despite the scientific consensus that meat farming uses a great deal of water and causes deforestation.

Critical thinker and UCT philosophy lecturer Jacques Rousseau wrote that "even if one believes it is ethical to eat meat‚ thinking that cattle farming can 'save the environment' is – at the very least – a gross simplification‚ deployed in the service of a pre-established conclusion. That’s called motivated reasoning‚ and is something we strive to avoid when trying to discover the truth."

When approached for a response‚ Noakes defended the use of the word “genocide”‚ and said the majority of the people who were interested in his nutritional views thought it was an appropriate statement.

He said there was a book which used the same terminology.

“I invite you to visit any hospital serving a poorer community‚ and see for yourself what is the health of the people who are eating high-sugar‚ high-carbohydrate diets low in (animal) fat and protein – the overall theme of the 1977 US Dietary Guidelines.”

He said instead of focusing on the use of the word genocide‚ the focus should be on human health‚ which he asserted had been very severely impacted over the past 40 years by the adoption of dietary guidelines that were never tested to see what the outcome would be.

Noakes claimed that life expectancy in the US was static‚ and was falling in certain groups.

“It was the US who gave us these guidelines. The Japanese are living longer as they have adopted a diet higher in fat and protein‚ and their blood cholesterol levels are rising‚” he asserted.

He alleged that the evidence was clear that populations following the dietary guidelines were getting sicker.