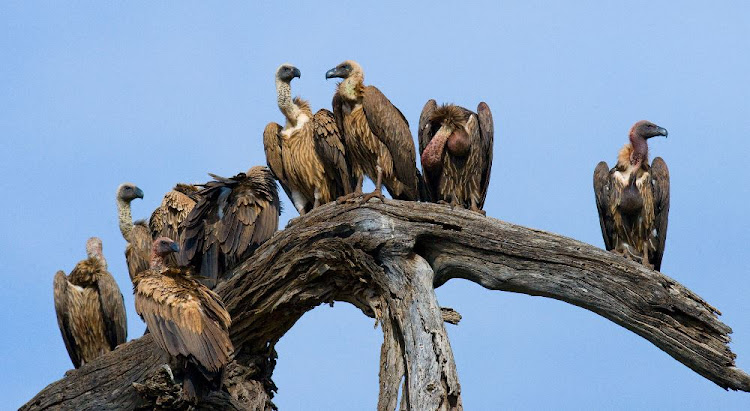 The poisoned bodies of nearly 50 vultures have been found by rangers in Mozambique‚ just a short distance from the boundary of the flagship Kruger National Park.

The discovery was made last week by a joint patrol of SA National Parks and Mozambique wildlife rangers in the Limpopo National Park‚ which directly abuts the Kruger Park.

The Peace Parks Foundation‚ which is helping to fund anti-poaching operations in the Limpopo sector of the trans-frontier conservation area‚ said the carcasses of 49 vultures and two jackals had been found in two nearby poaching camps. Rangers suspect that the poachers had laced a number of antelope carcasses with chemical poisons with the intention of poaching lions‚ whose body parts are in increasing demand for local and Eastern traditional medicine.

In the first incident‚ 37 dead vultures and two jackals were found next to poisoned carcasses of a waterbuck‚ wildebeest and impala.

More than 6‚000 lion skeletons have been exported from South Africa to south-east Asia in the last decade.
News
4 years ago

“At a second site the poisoned carcass of a zebra was surrounded by the remains of 12 more vultures‚” a Peace Parks spokesman said in a statement this week. “Considering that most vulture species are even more threatened as a species than rhino‚ this is a great tragedy.

“Fortunately‚ the poachers had not been successful in killing any lions at either of these sites. Lions are also threatened‚ with current worldwide estimates indicating that there are only 20 000 wild lion remaining‚ as opposed to an estimated population of 29 000 rhino.”

According to the Endangered Wildlife Trust‚ vultures are under immense pressure from a range of human activities. These threats have resulted in a rapid decline in Africa and Asia particularly‚ where most of these birds are now listed as critically endangered

Vultures are particularly vulnerable to mass die-offs from poison baits laid out to kill other high-value wildlife species. Last year‚ nearly 150 vultures were killed in two poison incidents in northern Botswana. In Zambia‚ another 105 vultures were poisoned in South Luangwa National Park and another 56 vultures on the boundaries of Tanzania’s Ruaha National Park.

The Peace Parks Foundation‚ concerned about the negative impact of continued poaching in Limpopo National Park‚ said it had mobilised more than R7-million recently to help bolster anti-poaching efforts in the park. The French Development Agency would provide another R13-million to the project.

The foundation said the money would be used to establish an expanded Intensive Protection Zone (IPZ) in Limpopo National Park. “With more than one million hectares to patrol‚ implementing effective anti-poaching strategies throughout the Park remains a significant challenge.”

A new central command centre has been equipped with the latest technology systems‚ which also enables cross-border communications between the Limpopo and Kruger national parks.