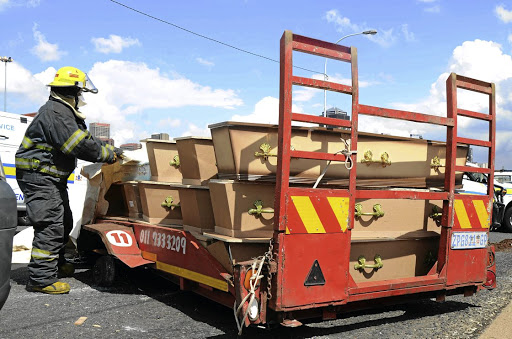 DEATH ON THE ROAD A trailer carrying corpses of paupers and stillborn babies broke down on the M1 South, Johannesburg, on Wednesday.Picture: Mduduzi Ndzingi

The owner of the funeral company whose trailer carrying 42 coffins was stranded on the M1 highway in Johannesburg insists that he had permission to transport the bodies.

But city authorities disagree and want a full investigation into the incident, which caused a portion of the highway to be closed to traffic on Wednesday.

Aaron Mabuza, who was transporting the coffins, conceded he might have been wrong to use the trailer to carry bodies. The trailer's two wheels came off on the M1 South highway. It was carrying 26 stillborn babies in coffins and 16 adults in body bags and paupers' coffins.

Mabuza said: "I took the paupers from Charlotte Maxeke Hospital to bury them at Olifantsfontein Cemetery."

The adult bodies being transported were to be given paupers' burials. They had been at the Charlotte Maxeke Johannesburg Academic Hospital mortuary for at least six months and were unclaimed or unidentified, said acting CEO of Gauteng Forensic Services Dr Lenny Modisane.

The stillborn babies were not paupers.

The breakdown of the trailer resulted in both the M1 South and North highways being shut during peak afternoon traffic.

Lungela Longwe, spokesman for MMC Michael Sun's office said the "documentation was not correct" to transport bodies. Sun demanded a full investigation into the event.

"The manner in which the bodies are transported is neither dignified nor hygienic, and it shows no respect to the deceased and their families."

Council officials confirmed the documentation was not correct and "corruption may have been involved".

In response to comments that his documentation was not correct, Mabuza said: "I don't know what you are talking about. I have documents with me.

"They are in body bags from [hospital] fridges. I came with coffins [to hospital]."

Mabuza showed The Times the paperwork for each body. An official from Charlotte Maxeke had signed off the bodies to be collected. The identity of some of the bodies was known.

Mabuza owns Soweto Funeral Services and said he did burial work for various cemeteries. His workers are temporary and are "neighbours who help me from Klipspruit".

Asked how 42 bodies fitted in a small trailer Mabuza said: "We pack them very nicely. It is a big trailer, that one."