Mahikeng residents vow protest will continue until their demands met 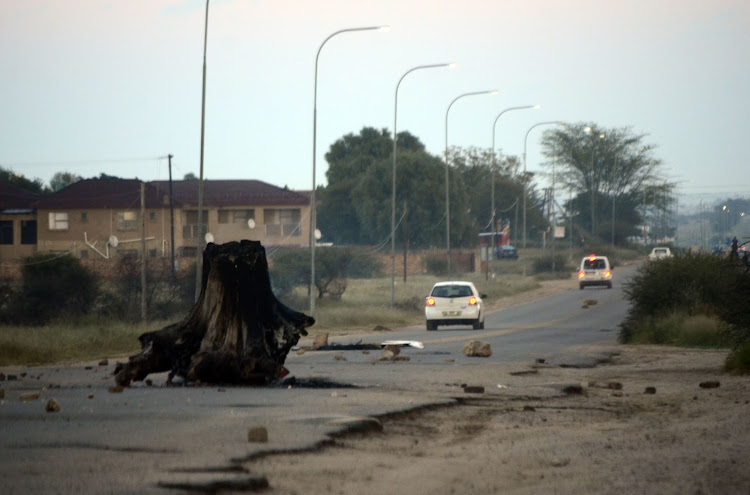 Violent protests erupted on the streets of Mahikeng on 19 April 2018 as residents demanded for the resignation of Premier Supra Mahumapelo.
Image: Tiro Ramatlhatse

North West capital Mahikeng on Thursday resembled a ghost town with a number of shops closed amid a violent protest.

A number of residents demanding service delivery and the removal of premier Supra Mahumapelo have blockaded entrances to the town with rocks and burning tyres.

Violence has also erupted with a number of shops looted.

Just as citizens take to the streets demanding the resignation of the premier‚ pharmacists in the North West have warned that the protests have led ...
News
3 years ago

North West police spokesperson Adele Myburgh confirmed that nine people have been arrested since the violence erupted on Wednesday.

“The suspects were arrested in Montshioa and surrounding villages respectively for public violence and malicious damage to property. They are expected to appear in the Mmabatho Magistrate’s Court soon‚” said Myburgh.

A drive around the town’s CBD shows litter strewn in a number of streets with only a few cars and residents visible in the streets. However‚ there was a heavy police presence as a number of police vans were seen doing the rounds.

Myburgh said it was during Wednesday night that the situation had worsened. “It was during the night that a truck trailer was torched in Moshawane village outside Mahikeng while a vehicle and a truck were set alight separately along Mahikeng-Vryburg road. There were also incidents of looting that were reported in areas such as Lomanyaneng‚ Montshioa and Mmabatho‚” she said.

Community members complained of police heavy-handedness in dealing with their protest. They said the town would be shut down unless their demands were met.

The ANC in the province said on Thursday that it was concerned about sporadic protests which have resulted in violence.

Mahikeng was shut down on April 19 2018 due to heavy protest action. The protest is over a bid to remove Supra Mahumapelo as the North West premier.

The revolt against North West premier Supra Mahumapelo continued throughout Wednesday night and into Thursday morning‚ with shops being looted and a ...
News
3 years ago

Let’s talk‚ not fight: Mahumapelo calls for end to protests

The office of embattled North West premier Supra Mahumapelo on Thursday called for an end to the mass disruptions in the province.
Politics
3 years ago

North West police were outnumbered overnight as angry protesters shut down the entire town of Mahikeng.
News
3 years ago
Next Article