Quiet in Mitchells Plain after shootout between police and residents 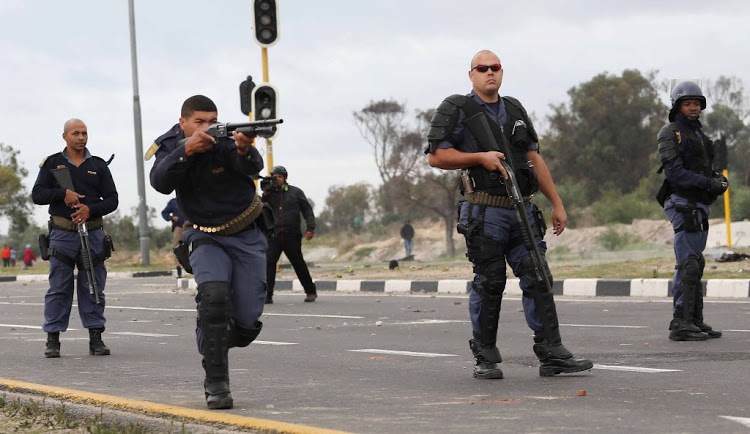 At least one person has died as protesters clashed in Mitchells Plain on Wednesday night. File photo.
Image: Esa Alexander

The streets of Mitchells Plain were quiet on Friday morning after a night of violence in the Cape Flats township.

Reports suggested that a peaceful community gathering had gotten out of hand after police fired rubber bullets to disperse the crowd on Thursday night.

"A crowd of about 500 in Highlands. SAPS using rubber bullets to disperse crowd. Individuals in crowd responding with live rounds on SAPS‚" read a message distributed on a WhatsApp group on Thursday night by Wayne Dyason‚ City of Cape Town law enforcement inspector.

Mitchell's plain a compete warzone right now!!!! Please share for those that are planning to use highlands drive or even vangaurd drive

Posted by Yaaseen Camphor on Thursday, May 3, 2018

A TimesLIVE reporter added: "(There was a) serious situation in Mitchells Plain last night. There is a Pagad presence amongst the protesters and there have been clashes between the police and protesters from Mitchells Plain. Police and City Law enforcement tried to disperse them but there were armed people in the crowd (officials estimate 500 people) who responded with live ammunition."

At least one person died when a taxi ploughed through a barricade during violent protests in Mitchells Plain, Cape Town, on Wednesday night.
News
4 years ago

Mitchells Plain community activists said that widely circulated social media messages warning of a lockdown in the Cape Town suburb ahead of a march ...
News
4 years ago

Dyason said in a text message on Friday morning: "All quiet now. Police and other services monitoring. Roads open."

At least one person has died amid the violent protests‚ sparked after demonstrations by residents of the Siqalo informal settlement who had been protesting since Tuesday night. They are demanding land and the provision of basic services. The protests led to a standoff with neighbouring Mitchells Plain residents.

Residents of Mitchells Plain blamed police for violent protests that carried on throughout Wednesday. Jakes Gerwel Drive and Highlands Drive were among the roads closed by the protesters.

At 8:30pm last night, i received a msg indicating that some #MITCHELLSPLAIN residents were meeting at ground zero to form a chain, nothing out of hand. barely 2 hours later sounds of shots filled the air - stun grenades, teargas etc. #siqalo @Our_DA @CityofCapeTown @eNCA