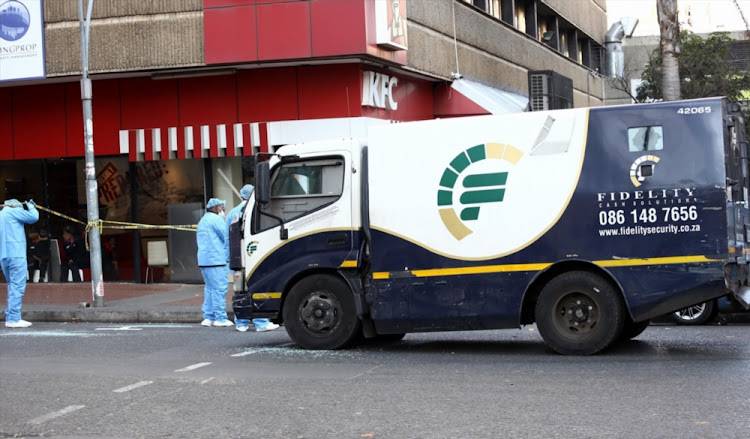 Cash in transit heist accused Itumeleng Manama‚ told the Roodepoort Magistrates Court he had nothing to do with the heist in Dobsonville that saw him and three others being arrested
Image: Gallo Images / Sowetan / Masi Losi

Itumeleng Manama‚ arrested with a former Luthuli House employee after a Soweto cash-in-transit heist‚ has a previous conviction of conspiracy to commit robbery. This was revealed on Friday as Manama took to the stand to apply for bail in the Roodepoort Magistrate’s Court.

He told the court that he had been sentenced to 11 years in prison but did not complete the sentence because he was released on parole.

But he said he had nothing to do with the heist in Dobsonville in July that he and three others were arrested in connection with.

“I intend to plead not guilty‚” Manama said in his affidavit. Magistrate John Baloyi paused the reading of the affidavit‚ saying that he was not compelled to give an explanation because it could be used against him during his trial. Baloyi gave him a chance to withdraw the statement but Manama elected not to.

The bail hearing for four men – including axed ANC branch secretary Errol Velile Present – has resumed in the Roodepoort Magistrate’s Court on Friday.
News
3 years ago

In his affidavit‚ he said the police did not have a case against him. “I will submit that I was not part of the robbery.” He added that the alleged stolen money was not found on him‚ he was not found in possession of vehicles used in the robber and no fingerprints or CCTV footage linked him to the heist. “There is nothing linking me to the offence against me.”

Manama told the court that he was assaulted by about eight police officers when he was arrested at his girlfriend’s house in Honeydew. “I was severely assaulted‚” he alleged‚ saying that police had placed a plastic bag over his head and pepper-sprayed him when they asked him about guns.

Manama is the second of the four to testify in a bid to be released from custody and get bail. Earlier‚ Zakhele Zondi‚ a cousin of former ANC branch secretary Errol Velile Present‚ also claimed he was assaulted by police.

The bail application in the case involving a former ANC employee accused of involvement in cash heists has been postponed after marathon arguments at ...
Politics
4 years ago

Present‚ who is another of the accused‚ was the Dobsonville ANC branch secretary in Soweto and a national ANC organiser‚ before the party moved his position to Luthuli House after news of his arrest made headlines.

The fourth accused is Bheki Biyela.

A security guard was shot at and wounded during the heist‚ which occurred outside the Capitec Bank branch on Elias Motsoaledi Road.