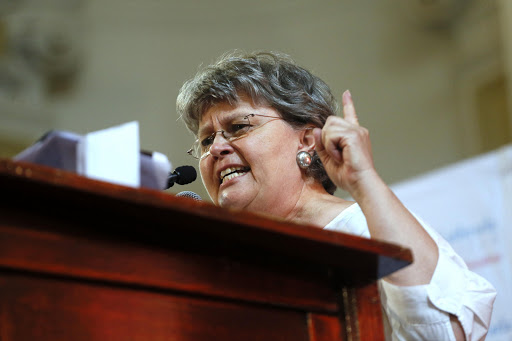 Former public enterprises minister Barbara Hogan is on Wednesday expected to testify how Jacob Zuma made it difficult for her to do her job and how his friends‚ the Guptas‚ pressured her into scrapping a lucrative flight route to benefit their business interests.

Hogan is expected to tell all when the Zondo commission of inquiry into state capture resumes on Wednesday. Last year‚ at the funeral of her late husband‚ struggle icon Ahmed Kathrada‚ Hogan described Zuma as a president who had “gone rogue” and “defied his own party”.

The struggle stalwart is expected to give evidence about the events building up to Zuma’s 2010 cabinet reshuffle and her knowledge of the reasons she was fired. She was one of seven ministers removed during the first of Zuma’s 11 cabinet reshuffles.

Hogan‚ who served as public enterprises minister between 2009 and 2010‚ will attest to the pressure she endured by members of the controversial Gupta family and their business associates to scrap a lucrative flight route between Johannesburg and Mumbai‚ which at the time was dominated by South African Airways.

Hogan’s testimony is also expected to describe the working relationship between herself and former president Zuma.

In 2016 she was interviewed by then public protector Thuli Madonsela. Her statement formed an integral part of Madonsela’s State of Capture report.

In the interview‚ Hogan said Zuma and then ANC secretary-general Gwede Mantashe “took interest” in her mandate to make appointments on the boards of various state-owned entities like Eskom‚ Transnet and Denel.

Leaked emails from within the Gupta business empire in 2017 showed how the family and their associates used their influence over government officials to score millions in tenders from these state-owned companies. Hogan told Madonsela that Zuma was particularly interested in the board members at Eskom and Transnet and Mantashe in those at Transnet specifically.

She also alleged that Zuma made it difficult for her to do her job – at a certain point not allowing her to appoint senior managers in her department.

In the interview‚ Hogan also described a state visit to India in 2010‚ when she noticed that members of the Gupta family had allegedly “taken over control of the proceedings and were appearing to be directing the programme”.

During the visit‚ she said the chief executive officer of Jet Airways wanted to meet with her on several occasions. It was the same Indian airline which chartered an aircraft to the Guptas to carry members of their family to a Sun City wedding in 2013.

It is believed the Guptas lobbied government officials to drop SAA’s profitable flights between Johannesburg and Mumbai in favour of Jet Airways.

The allegations were corroborated in the testimony of former ANC MP Vytjie Mentor‚ who told the commission last month that she was offered Hogan’s job in 2010 in exchange for doing the Guptas’ bidding‚ which included cancelling the same flight routes.

Mentor turned down the offer and Hogan was axed by Zuma soon afterwards. She was replaced with Malusi Gigaba‚ who is now home affairs minister.

Hogan’s relationship with Zuma has since soured‚ and she has emerged as one of the voices advocating against state capture and corruption.

Nhlanhla Nene has resigned as finance minister, the presidency announced on Tuesday.
Politics
3 years ago

State capture probe could have been done in six months: Thuli Madonsela

Former public protector says Gupta assets should have been grabbed while they were here; hopes commission's evidence can be sent straight to the NPA
News
3 years ago

RAY HARTLEY: Why Ramaphosa's appointment of Mboweni is a masterstroke​

President Cyril Ramaphosa has accepted the resignation of Nhlanhla Nene and appointed Tito Mboweni as his new finance minister in a two-part ...
Ideas
3 years ago

One little lie: How the Guptas got Nene in the end

What caused the unravelling of Nhlanhla Nene?
News
3 years ago