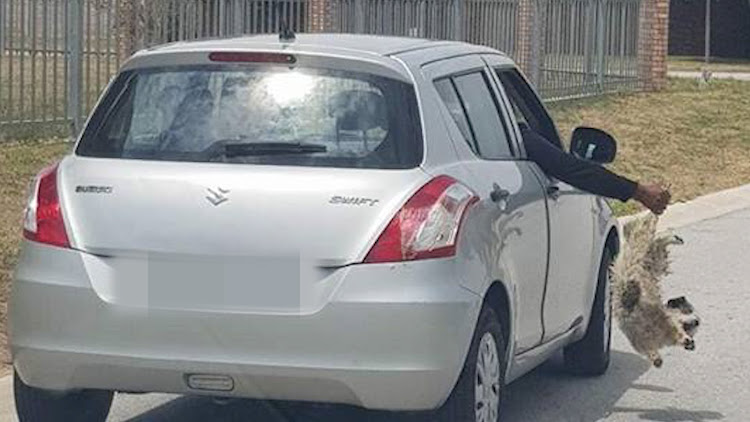 A picture of a dog hanging from a car's window in the Eastern Cape has caused an outcry on social media.
Image: Supplied

The Animal Welfare Society has condemned an act of cruelty depicted in a photograph of a motorist dangling a dog by the hind leg from the window of a car.

"Our first priority is to make sure that the dog is not injured in any way," said Hannes Stander, manager of the society in Port Elizabeth, on Thursday.

The picture of the dog being held by its leg, hanging outside the window of a silver Suzuki Swift with Eastern Cape registration plates, caused a storm on social media on Wednesday.

Gerald Cloete is suing the owner of three dogs that attacked him in Port Elizabeth for R2.4-million.
News
2 years ago

The incident reportedly happened in Port Elizabeth and the motorist has been tracked down by the Animal Welfare Society.

Stander said the society knew where the owner of the dog lived and had also sent an inspector to his house.

"My inspector went back again this morning and he [the owner] said that he went to the police station to give his side of the story," he said.

Police spokesperson colonel Priscilla Naidu said a case of animal cruelty had been opened by a third party, not by the person who took the photograph.

"We are trying to trace the person who put the picture on social media." Police wanted to get a witness statement from the person.

The dogs are left bloody and torn apart, but the violence is a mirror of the societies the fights occur in
News
2 years ago

As animal welfare organisations prepare for their busiest time of year, clinics and veterinary services are facing the added burden of an outbreak of ...
News
2 years ago