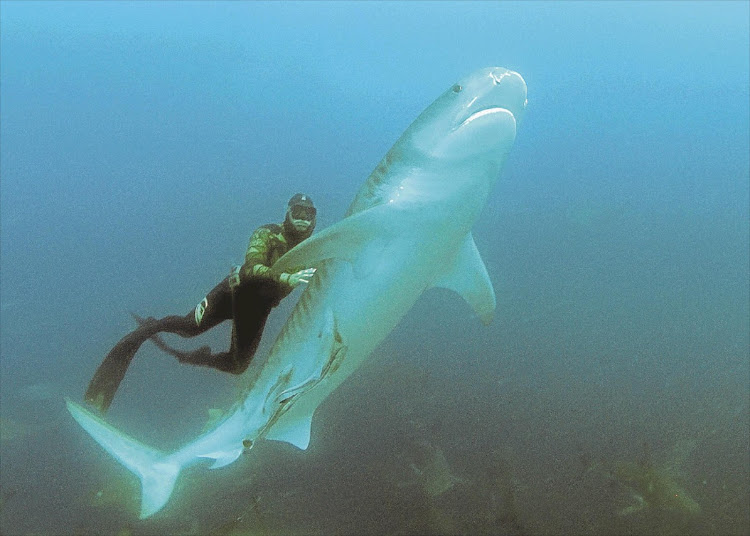 Mark Addison has a close encounter with a tiger shark in the Indian Ocean off the coast of KwaZulu-Natal Picture: SIJMON DE WAAL

A coalition of non-profit organisations is embarking on a new campaign aimed at saving the country's oceans - and it wants you to give it a name.

In 2018, organisations including Wild Oceans, Ocean Unite, WWF SA, the Centre for Environmental Rights and the South African Association for Marine Biological Research launched a marine protected areas (MPA) expansion project, with the objective of getting the South African government to declare 1% of the country's coastline as an MPA by 2020.

The project - titled "Only this much" - was also aimed at paving the way for African countries to support a global target of 30% strongly protected areas by 2030.

Scientists step up demand for government to protect oceans

A group of young marine scientists are questioning why government is stalling on declaring a network of Marine Protection Areas (MPAs).
News
3 years ago

"We are pleased to announce that the MPA expansion project is now moving into its second phase to support our government's commitment to achieve at least 10% MPA coverage for the waters around South Africa," Wild Oceans executive director Dr Jean Harris said.

The new phase, according to Harris, will see the launch of the new campaign to support ocean protection and highlight the benefits of MPAs.

"This is an opportunity to celebrate the success already achieved and a chance to build new positive energy for ongoing efforts by government and civil society to protect our oceans," said Harris.

"With the campaign and project shifting into its second phase with new objectives and ideas, we need a change, and this is where you come in. We want you to help us come up with a name for the new campaign."

They want a name that is upbeat. It must also be "positive, short, punchy and inspirational” - and should promote the value of South African oceans.

Thousands of school students across South Africa called on government to act against climate change. Youths demonstrated at Parliament in Cape Town, ...
News
2 years ago