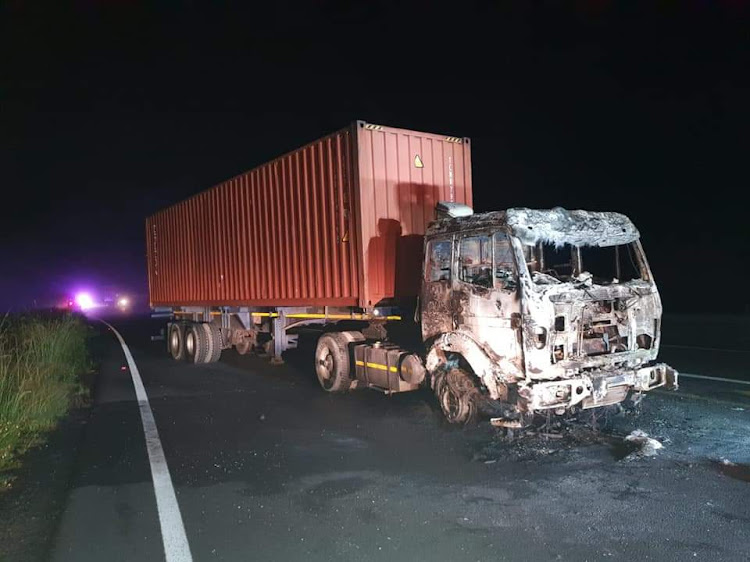 Seven trucks were set on fire in the early hours of Thursday morning.
Image: Supplied

A group of men armed with sticks, sjamboks and iron rods blockaded the N3 near Mooi River to force truck drivers out of their vehicles in the early hours of Thursday morning.

It was suspected that the torching of the trucks could be related to the hiring of foreign drivers by local trucking companies.

Police are investigating a case of malicious damage to property.

"A group of men armed with sticks, sjamboks and iron blockaded the N3 freeway northbound and forced five truck drivers out the trucks.

09h03 #AlertUpdate: Protest action has stopped at N3-4 57.8 near Hidcote I/C 152. N/B (JHB bound) is closed and traffic is diverted at Mooi River North and back to the N3 at Hidcote. S/B (DBN bound) is opened and traffic is free flowing.

"They set the trucks alight and proceeded to the southbound lane where they burnt two trucks before fleeing the scene," said Zwane.

The N3 near Mooi River was closed in both directions to allow for the recovery of the burnt vehicles.

The latest incident comes after mayhem erupted on Sunday when a truck protest brought traffic to a standstill along the N3.

That incident was strongly condemned by transport minister Blade Nzimande. It is understood that truckers were protesting about working conditions and the employment of foreign drivers.

Sipho Zungu, chairman of the All Truck Drivers Foundation which represents aggrieved truckers, said he was shocked to learn about the recent action but not surprised by it.

"Government doesn't respond to us or recognise us as South African truck drivers, we have been in meetings with them and asking them to enforce laws that make sure that we are hired and not foreign nationals," said Zungu.

Meanwhile, N3 Toll Concession spokesman Con Roux said traffic on the southbound carriageway heading into Durban had started flowing but advised those travelling to Johannesburg to delay their travel plans.

"At present, the recovery process of five trucks on the northbound carriageway is still in process, please delay departure to Johannesburg by as much as possible, there is a very extensive backlog at Mooi plaza," said Roux.

Roux said the road would be reopened within the next few hours.

The N3 freeway near Mooi River has been closed following another round of protests by truck drivers on Thursday.
News
3 years ago

Truck drivers, operating in the vicinity of the Durban port, were caught in a blockade by a group of protesters on Monday.
News
3 years ago