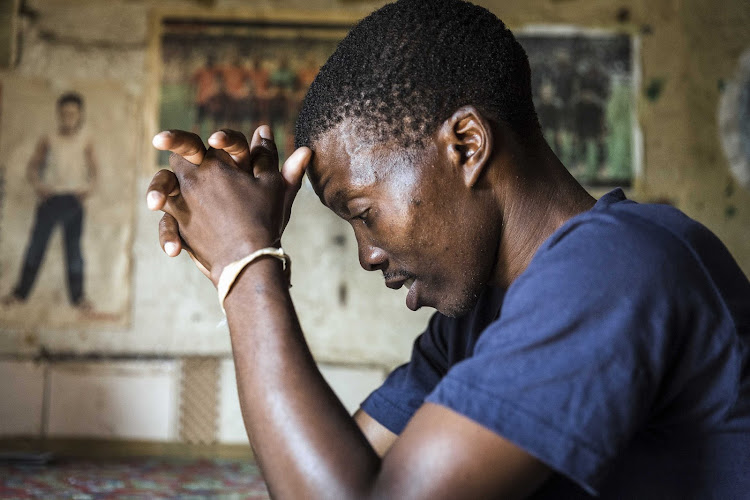 Security guard Sabelo Maziba has opened up about the incident in which Kaizer Chiefs football fans beat him nearly to death after the semifinal of the Nedbank Cup at Moses Mabhida Stadium in Durban in April 2018.
Image: Rajesh Jantilal / New Frame

Sabelo Maziba almost lost his life over a football game.

Just about a year later, Maziba, 32, still carries the scars from his near-death experience. Those scars aren't visible when you meet him.

But they are there, emotional and physical scars that will take an eternity to heal. Doctors have told the security guard that part of his spine is bent. When it's cold, he experiences chest pains as a result of the blows he suffered at the hands of hooligans who rushed on to the field at Durban's Moses Mabhida Stadium on April 21 last year. This was after Kaizer Chiefs lost 2-0 to Free State Stars in the semifinal of the Nedbank Cup.

Those hoodlums attacked security guards, who tried to bring order to the chaos that ensued from the pitch invasion. They beat Maziba almost to death and destroyed property worth millions of rands - ranging from broadcasting equipment to stadium chairs.

Just thinking of that day makes Maziba emotional, yet he isn't angry with the people who almost killed him.

One of the men arrested and charged for the incident, Kwezilomo Madiba, was found guilty of public violence and sentenced to three years in jail. Eight co-accused in the case were given suspended sentences.

One of the Moses Mabhida Stadium soccer hooligans - who repeatedly kicked a security guard during a pitch invasion - has been sentenced to three ...
News
3 years ago

"I don’t hold grudges," Maziba said in his room at KwaMashu Hostel. "We can fight today, and a lot of people see that it’s quite an intense fight, but I will still speak to you the following day. The only time I wouldn’t speak to you is if I speak to you and then you don’t respond. I am not the type of person who holds grudges.

"When this thing with Chiefs was fresh, I hated the sight of anyone wearing a Chiefs jersey. I would be disgusted whenever I saw it. But I forgave and accepted what happened. Even those who did it probably regret it now.

"My question was, okay, I get it that Chiefs aren’t performing well, but what did I do wrong? Why was I beaten? We're grown people, but sometimes we act like children. You have to accept the situation. There's a way of voicing your grievances, but innocent people shouldn't suffer in the process."

Maziba speaks in a slow, calculated tone in which every word packs a punch. He delivers his sentences in a thick Zulu accent that betrays the fact he comes from northern KwaZulu-Natal, Mthunzini to be exact. His family back home, just like millions across the country, watched his gruesome attack on television in real time. A lot of people who saw it happen thought he was dead.

"When I think about that day, I am overcome with deep emotions of sadness. That's why I don't like to think about it, talk about it or be reminded of it," Maziba said. "When I see that video, I ask myself, how did I survive? How did I not die? I cheated death." 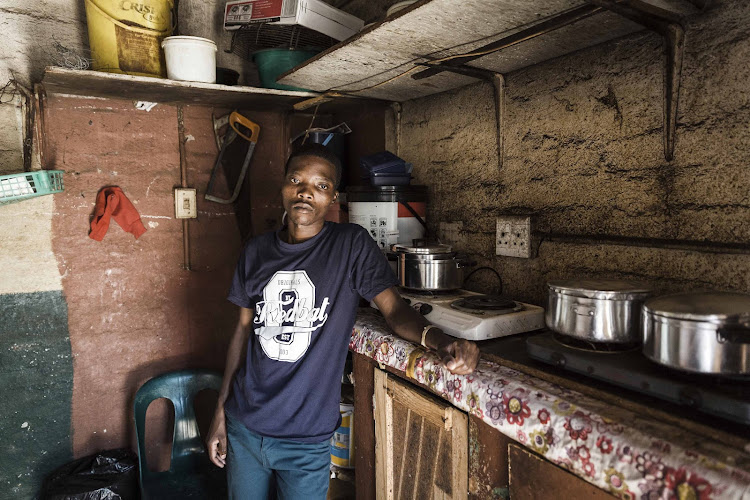 Sabelo Maziba shares his unit at the KwaMashu Hostel with three other men. His living arrangements and financial responsibilities forced him back to work as a stadium security guard after the attack.
Image: Rajesh Janitlal / New Frame

Surviving the attack was the "easy" part. What followed afterwards tested the 32-year-old’s mental and physical strength. He was alive physically, but not emotionally.

"It wasn’t easy," Maziba said, speaking in a hushed tone with his hands on his head and his eyes fixed on the table. "It’s just that I didn’t want to listen too much to the pain and say that since it’s painful, I’ll sleep. I would walk, even with the pain.

"I can say that I was living a lie. What I showed to the outside world was a pretence. I was pretending to be okay when I knew that deep down I wasn’t fine. I didn’t just use Western medication, I also went to traditional healers and took umhlabelo [traditional medicine for strengthening bones]. I tried everything at my disposal because all I wanted was to be fine.”

Maziba was working for Aneme Security at the time. He was to receive R200 for his services.

"I don’t want to lie and say that being a security guard is my calling," Maziba said. "I do it because the situation isn’t good, so I said let me try my luck at security. It’s not something that you do because you love it or you’re passionate about it.

"I am sure that if you ask 95% of security guards, they’ll tell you that they were forced by circumstances to be here, and not because this is something that they love. Don’t get me wrong, I do my job diligently. But I do it to survive, not because this is my passion. There are no jobs in this country. The security industry is one industry where it’s a bit easier to get a job."

The security industry is rife with exploitation. People like Maziba are paid the bare minimum even though they have to put their lives at risk to ensure other people’s safety.

A number of security guards who work at football matches aren’t hired full-time, they are casual labourers who are paid per match. They are given the few notes they receive by hand, hours after the stadium has emptied. Some are paid as little as R150 and, worse, a large number of these guards do not receive any work benefits.

"I told myself that I wouldn’t go back to working as a security guard [after the incident at Moses Mabhida Stadium]," Maziba said. "But when I was sitting at home, I asked myself what’s the use of being proud when you don’t have any source of income? I went back. But when something like that happens, even the person who has hired me must know that I will not get involved. If anyone orders me to intervene, we will fight."

Durban ratepayers footed the more than R2.5m bill for repairs at the Moses Mabhida stadium after soccer hooligans stormed the pitch in April.
News
3 years ago

The father of one not only takes care of his son but also, as the second-born in a family of five siblings, sends money home to Mthunzini. He lives in a sparsely decorated unit in the hostel, which he shares with three other men. The cupboard where groceries would be kept is bare, with two two-plate stoves in the makeshift kitchen.

Living in these conditions and his financial responsibilities forced Maziba back to the job that almost killed him.

"I have done several games since then," he said. "I did the [MTN] final with Cape Town City [against SuperSport United]. I also did Bafana Bafana’s match against Paraguay. But I will never work in the big matches, the ones that involve Kaizer Chiefs and [Orlando] Pirates. Even if they ask me to work, I politely refuse. I only work in matches where I know that their fans aren’t provocative. I am not there because I want to be, I am forced by the situation."

James Dlamini, owner of Aneme, said they are forced into a situation in which they can only pay security guards peanuts.

"I agree that R200 is not enough," Dlamini said. "The problem is that we are also not paid much. If a company pays me R300 per security guard, that means if I pay them R200, I will be left with R100. I still have to do other administrative duties with the R100, including transport. It’s better when we work for big companies. Those companies pay us R1,000 per security guard and I am able to pay my people better."

How, then, do you solve this problem?

"We as security companies need to be united," Dlamini said. "The problem is that if I charge a certain fee, there’ll be a company that’s willing to charge less and obviously people will hire those who charge less. We need to have a standard fee that no company can charge less than."

In the meantime, people like Maziba will continue to suffer. But if more security guards adopt his mentality – that they will not involve themselves in any skirmishes that arise, because they aren’t paid enough to put their lives at risk – then supporter safety becomes an issue.

The trial of nine convicted soccer hooligans has been postponed to 2019.
Sport
3 years ago

Maziba is still waiting on the outcome of the claim Aneme submitted to its insurance company, as he was injured on duty. But that wait is filled with doubt.

"They didn’t take my banking details, along with the other security guard who was also injured. We don’t know what will happen with that money when the insurance eventually pays out."

Pirates posters and those of maskandi artists, including Mbuzeni and Dlubheke, are plastered on the wall of the place Maziba has called home since "2008 or 2009, I only remember that it was before 2010".

In his teens, the staunch Pirates supporter had ambitions of being like the footballers he now turns his back on at work, focusing on the crowd to ensure their safety.

"I still play football, but now I do it for fun more than anything, because I realised a long time ago that I would never turn professional. I then focused on making money and supporting my family," Maziba said.

He smiled, for the first time in close to an hour, when talking about his love for the Buccaneers.

"Where I grew up, there was one house in our village that had a TV, so we would all watch it there," Maziba said.

"There would be supporters of different clubs watching, laughing, shouting and having a good time. There would be a lot of debates and disagreements, but it was always peaceful. I loved John Moeti.

"Moeti and Dumisa Ngobe made me fall in love with football and Pirates. I still love football, even now and with what happened."