Seriously?! Another pole stuck in middle of new road 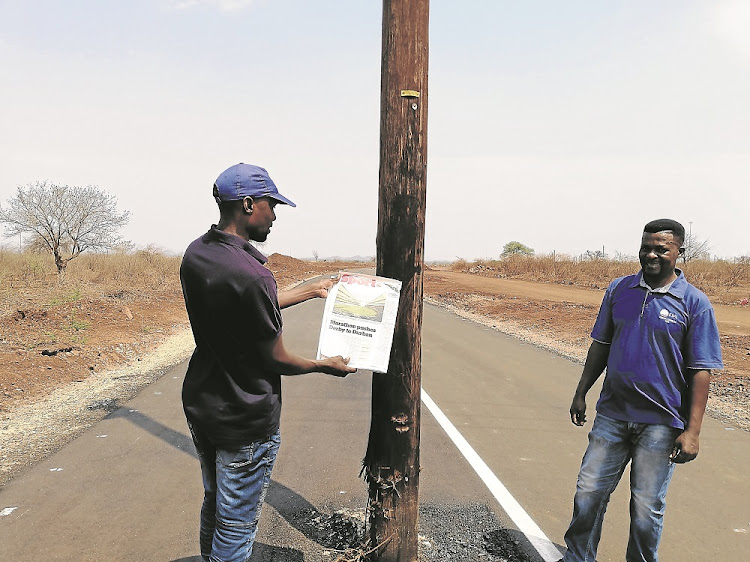 Fani Tsela, left, and William Shogole inspect the electrical pole in the middle of a newly tarred road in Limpopo.
Image: Peter Ramothwala/Sowetan

A newly tarred R10.5m road has an electricity pole stuck right in the middle of it.

Sowetan reported that the tarring of the road in Lebowakgomo, Limpopo, started in May and was scheduled to be completed and operating by October 22.

There was no clear explanation why the pole wasn’t removed before tar was laid around it, the newspaper reported.

Lepelle-Nkumpi municipal spokesperson Khali Maphoso told Sowetan the situation was “not that bad, because the road is not officially opened”.

“We have written to Eskom applying for the electric pole to be removed and the process is under way. The completed road will be open in the next two months,” he said.

This is the second incident of its kind to make the news recently, after the Mpumalanga municipality had to remove an Eskom pole that was rooted in the middle of a paved road.

TimesLIVE quoted Bushbuckridge municipality spokesperson Aubrey Mnisi as saying this was as a result of home stands being allocated to residents without following proper processes.

“There are no infrastructure plans for that.”

After Eskom erected the power lines, the municipality found that some of the poles were placed in the middle of the road, Mnisi said.

“We appointed engineers who were doing designs, but they could not remove the poles. We had to make a request to Eskom, who took some time. The engineer ended up giving the contractor the go-ahead to put paving down, with the intention to remove it later. That’s what happened.”

The municipality is delighted to announce that the Eskom Pole which was in the middle of the road has been removed . We would like to apologize for the inconveniences caused by this pic.twitter.com/sz8cVQTSVD

Vast infrastructure requirements and poor roads, lack of fencing and the proximity of informal trading are some of the challenges faced at the ...
News
2 years ago

Gwede Mantashe mocked for promoting something unobtainium to foreign investors

Mineral resources and energy minister Gwede Mantashe is the unfortunate butt of jokes on Thursday after trying to attract investment to South Africa ...
News
2 years ago