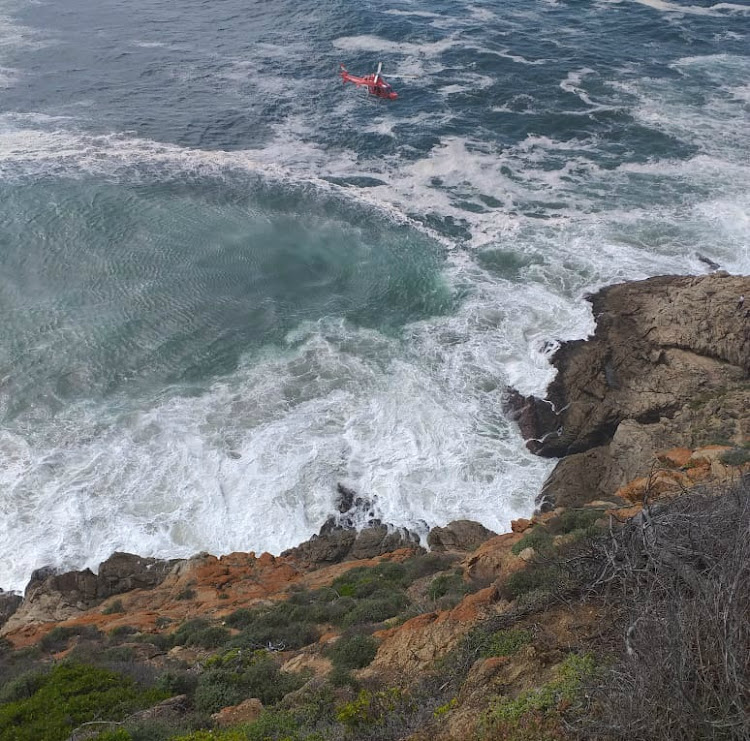 A helicopter helps retrieve the body of a man who drove off a cliff at Herolds Bay on the Garden Route on Wednesday.
Image: ER24

A man was killed when the vehicle he was in plunged off a cliff at Herolds Bay near George in the Western Cape on Wednesday.

Several hikers witnessed the vehicle, which had been travelling on Voëlklip Road, go over the cliff.

ER24 paramedics, police, Western Cape Metro Rescue and the George and Eden fire services arrived on the scene shortly after 9am.

“On arrival, medics found the vehicle some distance down the cliff, lying in the waves,” said ER24 spokesperson Russel Meiring.

“Rescue technicians immediately rigged a rope rescue system and made their way to the patient. At the bottom of the cliff, rescue personnel found that a man had been ejected from the vehicle and had sustained several injuries.”

The Red Cross AMS helicopter was called to airlift the body to the roadside. Once retrieved, medics found that the man had succumbed to numerous injuries and he was declared dead.

HeraldLIVE reported in October 2019 that at least eight people had died in the space of four years around Voëlklip, a popular picnic and fishing spot near Herolds Bay.

Some perished in car accidents, while others were washed off the rocks while fishing.

They include Heidi Scheepers, 35, and her two children, who died when their vehicle crashed over a cliff at Voëlklip in October 2019.

Etienne Scheepers, who lost his wife and two children at Herolds Bay, when their vehicle plunged off a cliff into the ocean, has dismissed ...
News
2 years ago

A climber believed to be in his 70s has died on Sunday afternoon after a rock-climbing accident in Kalk Bay in the Western Cape.
News
1 year ago