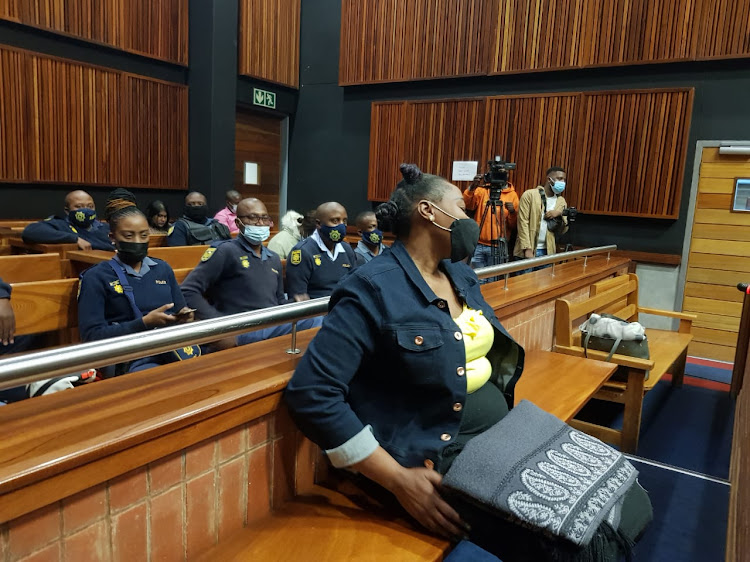 Ndlovu is accused of a string of crimes relating to her allegedly killing six people, and plotting to kill seven others, allegedly to cash in on insurance policy claims.

She is expected to be cross-examined by prosecutor Riana Williams at the high court sitting in the Palm Ridge magistrate's court.

She arrived in court accompanied by a large police contingent. She sighed, folded her arms and bowed her head as she sat down in the dock.

She said she was feeling better than she did on Thursday. At the end of proceedings, Ndlovu had told officers after the adjournment that she was in pain and would not make it to the police van via the stairs. This led the officers to use the public elevator to escort her from the third-floor courtroom.

THREAD: #rosemaryndlovu
In part ONE of our video series on the former policewoman Rosemary Ndlovu, we revealed hidden footage taken of Ndlovu where she allegedly tells a cop (who she thought was a hitman) to kill her sister and her sister's five young children. pic.twitter.com/VcgpKtPnOy

Alleged killer cop Nomia Rosemary Ndlovu has dropped one of the two witnesses she had planned to testify in her defence this week.
News
1 month ago

The former police officer who stands accused of killing six of her relatives for life insurance payouts, Nomia Rosemary Ndlovu, is on Thursday back ...
News
1 month ago

More undercover footage has been revealed showing alleged “killer cop” Rosemary Ndlovu telling a hitman and an undercover cop how easy it is for her ...
News
1 month ago