Just listen to her: ‘Zephany Nurse’ on woman dealing with being abducted soon after birth

Ermelo baby kidnap has dug up her own wounds 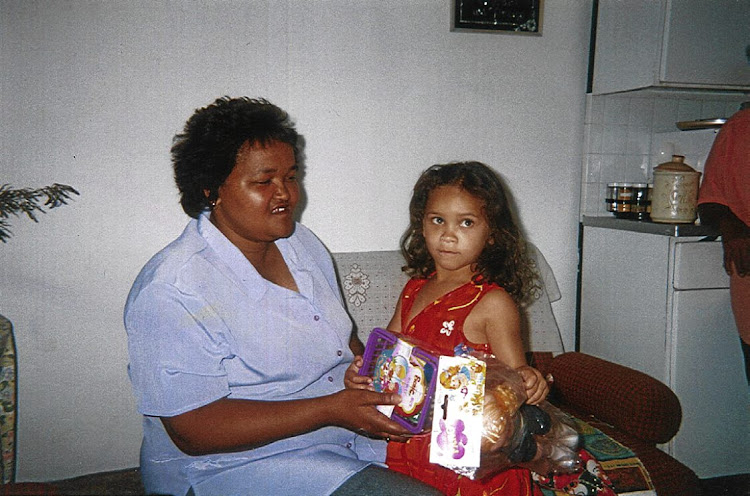 Lavona Solomon and Miche on Christmas Day when she was five years old. Lavona had stolen Miche from her cot at the Groote Schuur Hospital in 1997. The truth only came out over 17 years later.
Image: SUPPLIED

Miché Solomon — also known as Zephany Nurse — has offered her support to the 20-year-old woman from Mpumalanga who recently found out that she too was stolen from her biological mother hours after birth.

Solomon, who still goes by the name that was given to her by the woman who stole her and raised her as her own, said she understood exactly what this woman was feeling.

Don’t question what she is feeling or judge her, just listen to her

“To the 20-year-old woman whose entire life has been changed and redirected — you’re in my prayers, I’m thinking of you daily. You’re not alone. I know the confusion, the deadly fear, the anger, the questions. This never leaves us. When you’re ready one day, please reach out. I’m using my voice once again to reach you. You’re not alone,” said Solomon.

A curious Ermelo teenager who came across a picture on Facebook of a woman who looked just like his mother has helped Mpumalanga police solve a ...
News
6 months ago

The woman who Solomon was referring to was born to a 16-year-old girl on March 23, 2011 and stolen by a stranger who had offered to hold her when the new mother felt ill while waiting for the baby’s aunt to return from a nearby store.

The teen mom, who TimesLIVE has been referring to as *Sbahle Sithole, handed her baby to the stranger, who then said she would search for the aunt in the store only to never be seen again until last month.

In an extraordinary tale that brings to mind Zephany Nurse, young woman discovers that her 'mom' stole her
News
6 months ago

The now 20-year-old woman, whose biological mother said she had planned to name her Mfundo,  was discovered by chance. Her younger brother came across her picture on Facebook and questioned the stark resemblance between her and his mother. After being tracked and traced, a DNA test confirmed that this woman was his sister who was stolen a year before he was born.

Solomon, who was stolen from Groote Schuur Hospital in Cape Town and only discovered her true identity by chance in her teenage years, told TimesLIVE that after hearing the young woman’s story, she understood exactly how she was feeling.

“When I read through that story, it brought back the anxiety that I felt when I found out that I was stolen by the mother that had raised me.

“I could feel that fear and confusion come back and the horror of the nature of the story. It is actually sickening. I cannot help but wonder and stress about this young woman and if she is fine,” said Solomon.

She was 17 when she learnt that a schoolmate a few years her junior was in fact her biological sister. The two girls had met on school grounds after being told by numerous people that they looked alike, became friends, and Solomon got to know the girl’s family. Revealing her birthday to the girl’s family led to them piecing together that she was the daughter who was stolen from her cot three days after she was born while her mother recovered in hospital.

Zephany Nurse on her kidnappers, biological parents & being a mom

Zephany Nurse has broken her silence about her childhood, saying she never lacked anything and had a stable life.
News
2 years ago

Solomon recalled how tough it was for her, saying she believed Mfundo was also going through a battle of the mind at this time, as her “identity is ripped apart”, she added.

Last week, TimesLIVE travelled to Sbahle Sithole’s home where she shared how she was overjoyed to have found her daughter but expressed pain and disappointment after her daughter chose to return to the Carolina home where she was raised — promising only to visit her mother and newfound siblings.

Solomon had also chosen to go back to the home where she was raised after finding out the truth, saying she was “crucified” for the decisions she made back then.

“I was confused after getting those [DNA] results — all I needed at that moment was my mom (the woman who had stolen her), but I couldn’t see her because of her bail conditions,” said Solomon.

“What [Mfundo] needs right now is nobody to question her —  don’t question what she is feeling or judge her, just listen to her. The worst thing that could happen for her now is that there are too many voices and she is unable to handle it. I wanted to run away because there were just too many people that I was surrounded by, which I didn’t need at that moment,” she said.

Solomon said while her biological parents cried because they felt they were losing her again, she needed to make the best decision for her mental health at that moment, which was probably what Mfundo was also going through.

“Her biological mom may also be hurt or angered by the decision, but the best advice is to allow her to make the healthiest decision for her at this moment,” said Solomon.

Forgiving takes the burden off of you

Had she been forced to go live with the biological family after receiving the results, Solomon said she “probably would have committed suicide because it would have been equivalent to being pushed into lives of people I knew nothing about”.

Solomon advised the biological mother to not give up on her daughter,

“Just say to her ‘we are still going to be here, we will still fight for you and still want to know you’.”

Solomon said her life was never the same, not only for her but for the man she had known as her father for 17 years. The two of them had to readjust to life without her mother, Lavona Solomon, who after trial was handed a 10-year prison sentence.

The woman who kidnapped Zephany Nurse from Groote Schuur Hospital 19 years ago as she lay sleeping in her mother’s arms was sentenced to 10 years in ...
News
5 years ago

“I had to grow up much faster and my dad had to make changes too. My studies, my future had to change,” she said.

Solomon, now a mother of two, continues to have a close relationship with Michael Solomon, who had no idea that his wife had stolen the little girl. She is, however, still working on building a relationship with the Nurse family. She had earlier expressed the difficulty of it, saying there was no connection there.

The incident had affected her relationships. She said she did not trust people easily.

“Forgiveness did not come easy. I used to say I forgive my mom [for stealing me] but when things would remind me of it, I would be triggered.”

Her advice to Mfundo, however, was to forgive her abductor, albeit she “rewrote her entire life”.

“Forgiving her takes the burden off of you,” she said.

The woman behind Mfundo's kidnapping appeared in court last month and was released on bail of R1,000. Her case returns to court on January 18, 2022.

Reuniting not the end of pain, mother warns Zephany's family

Delores Cyster, also of Cape Town, is probably the only woman in South Africa who knows what Celeste Nurse must be going through. Nurse's daughter ...
News
7 years ago

Two Gauteng mothers have discovered that their three-year-old children were switched at birth. Even worse, one wants her biological child back, ...
News
8 years ago