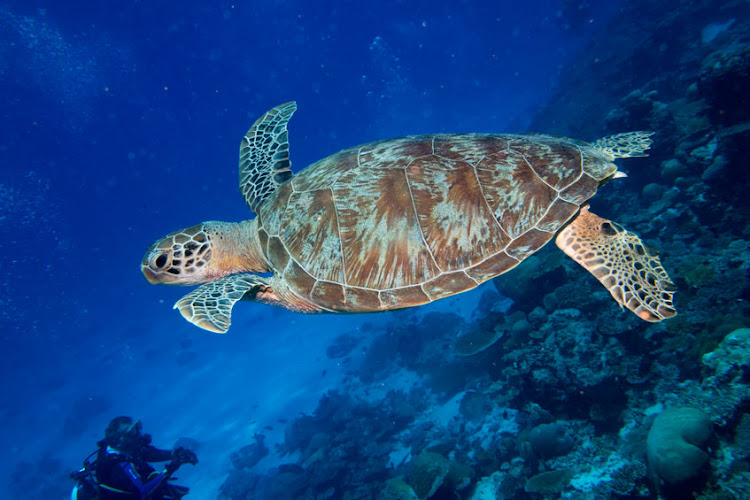 The turtle is on the road to recovery after rehydration and nutrients fed through intravenous therapy and rewarming. Stock photo.
Image: 123RF/izanbar

A green sea turtle is on the road to recovery at uShaka Marine World, almost 150km away from where it was rescued at Umkhobi beach in Kent Bay on the south coast of  KwaZulu-Natal.

He raised the alarm, saying it was opening and closing its eyes but appeared unable to move.

“NSRI crew, in our sea rescue vehicle, responded to investigate and joined a Mpenjati Conservancy member on the scene. The green turtle, a local species to the area, was found barely alive on the beach. uShaka Marine World, Durban, were alerted and they agreed to send a member towards Port Edward by road,” said Du Plessis.

A trauma board and blankets were used to gently transport the turtle off the beach and load it into a sea rescue vehicle.

“We rendezvoused with the uShaka Marine World member halfway between Durban and Port Edward, at the Hibberdene off-ramp, and the turtle was taken into their care,” said Du Plessis.

uShaka Marine World later confirmed that after rehydration and nutrients fed through intravenous therapy and rewarming, the turtle, nicknamed Donatello, was on the road to recovery. A beach release into a protected area would likely follow but it was too early to say when the turtle would be released.

The NSRI commended members of the public who assisted on the scene.

'If we can't pull it off, we have a problem and we will have to rethink,' says City of Cape Town coastal manager Gregg Oelofse.
News
8 months ago

Two arrested in North West for possession of lion's head

The Hawks have arrested two men in the North West for being in possession of a lion’s head.
News
7 months ago

Mineral resources minister Gwede Mantashe says opposition to Shell’s seismic survey off the Wild Coast is another "Nongqawuse moment" for the ...
Politics
7 months ago