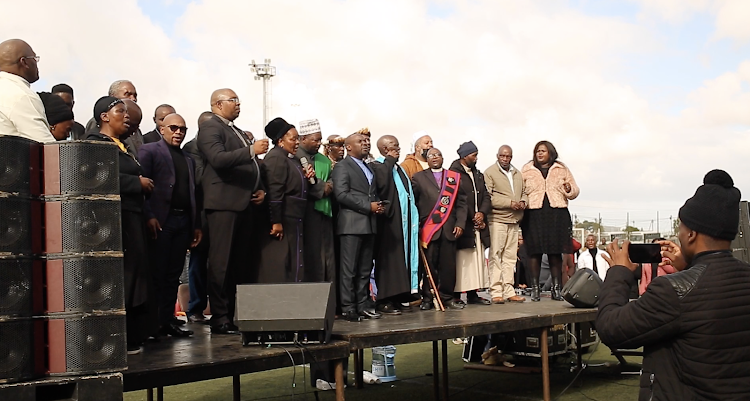 Religious leaders and community members converged on the Site C Stadium in Khayelitsha, Cape Town, on Wednesday to pray for an end to violent crime.
Image: Screengrab

Religious leaders, residents and police in Khayelitsha came together for a day of prayer at the Site C Stadium as the community reels from a recent spate of murders.

Just this week it was reported that three siblings were killed in a mass shooting, while six others were killed earlier this month.

There were two similar shootings in March.

Religious leaders held an interfaith event to build community solidarity among those opposed to crime. It is believed that the shootings are linked to gang activity.

The police cluster commander in the area Maj-Gen Vincent Beaton told the community that the murders were linked to extortion.

“Do you know why they are fighting? It is actually very sad. They are fighting over the money of innocent people that are making money legally. Fighting for other people's money that they go and collect ... It's what we call extortion,” he said.

Safety MEC Reagen Allen said police must use all their resources to find the perpetrators behind the shootings.
News
1 month ago

Western Cape organised crime detectives are investigating after three members of a family were shot dead in Ekuphumleni, Khayelitsha, on Sunday night.
News
1 month ago