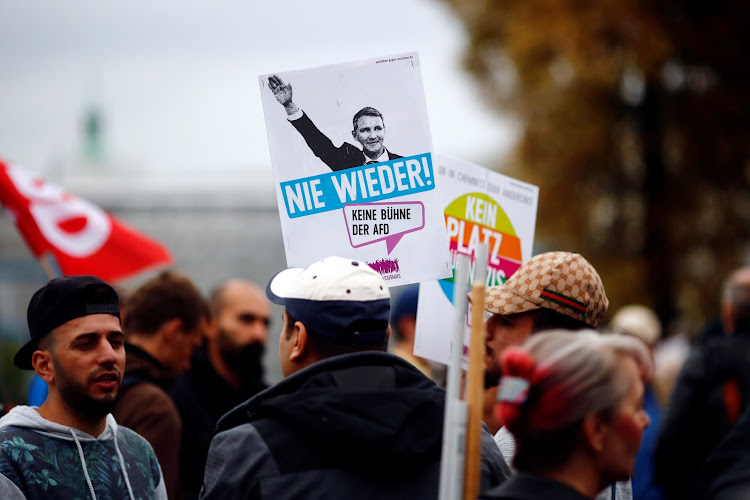 A counter-protest against a demonstration of anti-immigration party Alternative for Germany (AfD) in Chemnitz, Germany on September 1 2018. The front banner reads "Never again! No stage for AfD", the one in the back "No space for Nazis".
Image: Reuters/Hannibal Hanschke

Leading German social democrats and some conservatives called on Monday for surveillance of the far-right Alternative for Germany (AfD) after some of its leaders marched with the anti-Islam Pegida group.

Some 6,000 supporters of the two groups demonstrated in the eastern city of Chemnitz on Saturday after the fatal stabbing of a man, allegedly by two migrants.

The case and subsequent xenophobic attacks have revived a debate over Chancellor Angela Merkel's liberal immigration policy and the need to crack down on far-right groups. Socialist SPD leader Andrea Nahles said in Bavaria that she backed observation of the AfD: "After Chemnitz, there are good reasons to do that. The AfD allowed itself to become a front organisation for radical rightists in the streets of Chemnitz, either willingly or unwillingly."

Bavarian premier Markus Soeder told the broadcaster ntv there might not be enough evidence to warrant observation of the AfD as a whole, but individuals could potentially be monitored.

He said he was troubled by the AfD's actions in Chemnitz, and rejected calls by some party members to relax gun control laws in Bavaria. "It's not just about an opposition party; they have a hidden agenda," he said. "We have to send a clear signal in Bavaria that we don't want what happened in Chemnitz."

[A crackdown] may well give it a sort of martyr image

AfD leader Alexander Gauland has said public anger after the stabbing in Chemnitz was justified, but that his party does not support extremism.

The AfD, which won nearly 13 percent in last year's federal election, rose two percentage points in an opinion poll after the events in Chemnitz.

Martin Doering, spokesman for the intelligence service of Saxony, where Chemnitz lies, said a decision on surveillance would be premature, and that it could take weeks to complete investigations into possible right- and left-wing extremism surrounding the Chemnitz case.

Interior Minister Horst Seehofer and his Bavarian CSU say the conditions have not been met to monitor the AfD as a whole.

Volker Kauder, a top Merkel aide, said on Sunday that comments by some AfD politicians inciting violence against media groups showed the party wanted to "attack our state".

But Stefan Mayer, state secretary in the interior ministry and a member of the CSU, said a crackdown on the AfD could backfire: "That may well give it a sort of martyr image."

Fifty-seven percent of Germans polled agree that the AfD should be monitored by the government.

A German court fined the father and two uncles of an 18-year-old Muslim citizen for depriving him of his personal freedom when he was a minor in an ...
News
6 years ago

Merkel's party doubles down on "values" after Trump and Brexit

After a U.S. presidential election and Brexit campaign that were tarnished by lies, vicious political attacks and deceptive online news stories, ...
News
4 years ago