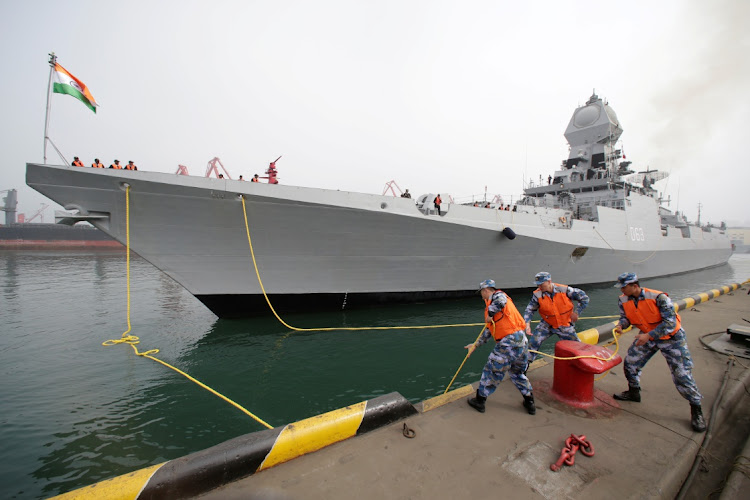 “The deployment of the Indian Navy ships seeks to underscore the operational reach, peaceful presence and solidarity with friendly countries towards ensuring good order in the maritime domain..." the navy said.
Image: REUTERS/Jason Lee/File Photo

India is sending a naval task force to the South China Sea this month to expand security ties with friendly countries, officials said on Wednesday, signalling its intent to play a bigger role in regional efforts to counter China.

The Indian military has been traditionally wary of antagonising China but the mood has hardened following clashes between troops on the disputed land border last year. The government has since drawn closer to the US in efforts to push back against China.

Four ships including a guided missile destroyer and a missile frigate will be deployed for a two-month period to Southeast Asia, the South China Sea and the western Pacific, the navy said in a statement.

“The deployment of the Indian Navy ships seeks to underscore the operational reach, peaceful presence and solidarity with friendly countries towards ensuring good order in the maritime domain..." the navy said.

The South China Sea has become one of many flashpoints in the testy relationship between China and the US, with Washington rejecting what it calls unlawful territorial claims by Beijing in the resource-rich waters.

In June, a US aircraft carrier group led by the USS Ronald Reagan entered the South China Sea as part of a routine mission and a British carrier group is due to undertake exercises in the Philippine Sea this month.

As part of their deployment, the Indian ships will take part in annual joint war drills involving the US, Japan and Australia off the coast of Guam, the navy said.

The four countries make up the Quad, an informal group, that US President Joe Biden's administration is promoting as a way to counter an assertive China.

“These maritime initiatives enhance synergy and co-ordination between the Indian Navy and friendly countries, based on common maritime interests and commitment towards Freedom of Navigation at sea,” the Indian navy said in its statement.

China has in the past criticised multilateral military manoeuvres as destabilising to the region.

Filipino fisherman Randy Megu has often braved the storms that spring up in the South China Sea, but these days he has a greater fear: seeing a ...
News
2 months ago

The Philippine military is sending light fighter aircraft to fly over hundreds of Chinese vessels in disputed waters in the South China Sea, its ...
News
5 months ago