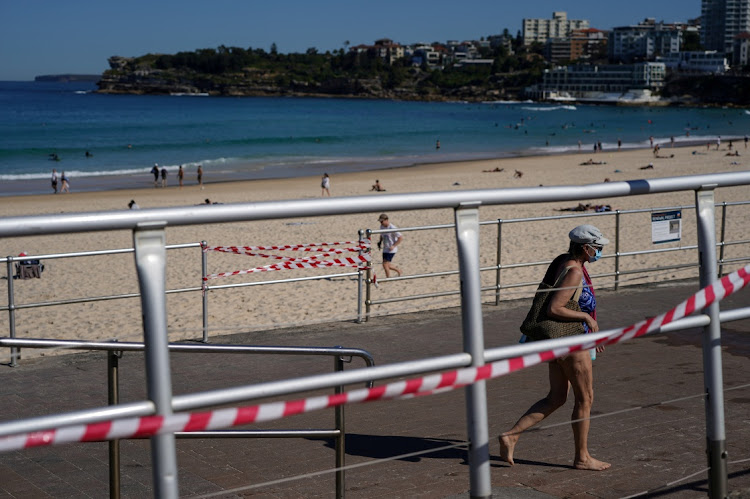 A beachgoer in bathing suit and protective face mask walks up the promenade at Bondi Beach during a lockdown to curb the spread of a coronavirus disease (Covid-19) outbreak in Sydney, Australia, September 1, 2021.
Image: REUTERS/Loren Elliott/File Photo

Sydney, the epicentre of Australia's biggest coronavirus outbreak, is expected to see daily infections peak next week, authorities said on Monday, as they look to speed up immunisations before easing lockdown rules.

Australia is trying to contain a third wave of infections that has hit its two largest cities, Sydney and Melbourne, and its capital Canberra, forcing more than half the country's 25 million people into strict stay-at-home restrictions.

New South Wales Premier Gladys Berejiklian said the government's modelling revealed the state would require its highest number of intensive care beds in early October, with “additional pressure on the system” in the next few weeks.

Daily cases in Sydney's worst-affected suburbs are expected to rise to as high as 2,000 until the middle of this month, the modelling showed.

“If too many of us do the wrong thing, (if) there are too many super-spreading events, we could see those numbers higher,” Berejiklian said during a media briefing in Sydney, the state capital.

A total of 1,071 Covid-19 cases are currently in New South Wales hospitals, with 177 people in intensive care (ICU), 67 of whom require ventilation. Officials have said they had quadrupled ICU beds to about 2,000 in the state early last year to handle the pandemic.

Despite the recent outbreaks, Australia's coronavirus numbers have remained relatively low at around 63,000 cases and 1,044 deaths helped by hard lockdowns and border restrictions.

But businesses have had to bear the brunt, with Australia on the brink of a second recession in as many years.

Melbourne's giant observation wheel, part of the city's skyline for more than 15 years, will close permanently due to Covid-19-related “travel restrictions and sustained shutdowns”, its operator said on Monday.

Australian Industry Group, meanwhile, has warned the country could face power blackouts in summer if quarantine-weary workers refuse to cross state borders for repairs and maintenance.

Authorities have pledged more freedom of movement, including opening of state borders, once 70% to 80% of the population aged over 16 is vaccinated, though some virus-free states may delay their reopening plans due to the Delta outbreak in Sydney.

Just over 38% of Australia's adult population has been fully vaccinated, with the country expected to reach 70% by early November based on current rates.

The federal government has doubled the available Pfizer doses for September after last week entering into vaccine swap deals with Britain and Singapore for a total of around 4.5 million doses, with nearly half a million arriving overnight.

“There will be another set of flights in a couple of days, but we'll pretty much be getting a million of the four million every week over the next four weeks,” Lieutenant General John Frewen, head of the vaccination task force, told broadcaster ABC.

Frewen said one million doses of Moderna will also reach Australia in “a week or so”, becoming the third vaccine to join the rollout along with Pfizer and AstraZeneca shots.

Australia’s 'public health enemy number one' arrested for not isolating

Sydney's Covid-19 cases rose to a new daily record on Wednesday, putting parts of the health system under “severe pressure”, officials said, as they ...
News
3 months ago

Australia must start to learn to live with Covid-19 when higher vaccination targets are reached, Prime Minister Scott Morrison said on Monday, ...
News
3 months ago