Biden says US will not put troops in Ukraine, as tensions with Russia ease 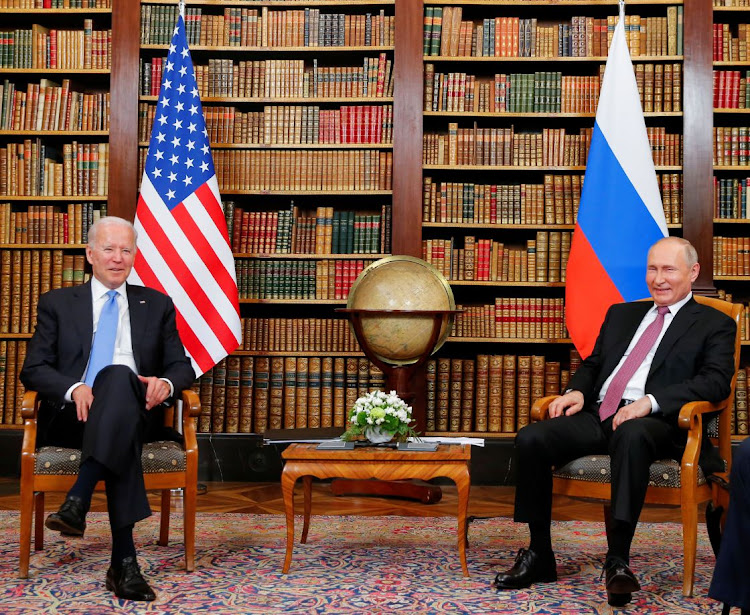 Biden warned Putin on Tuesday that the West would impose "strong economic and other measures" on Moscow if it invaded, while Putin demanded guarantees that NATO would not expand to the east.
Image: REUTERS/Denis Balibouse/Pool

US President Joe Biden said on Wednesday that putting American troops on the ground in Ukraine to deter a potential Russian invasion was "not on the table," as tension between Moscow and Washington eased slightly after a virtual summit this week.

Russian President Vladimir Putin said Moscow would send ideas to Washington within a week to follow up his talks with Biden on Tuesday about the Ukraine crisis.

Speaking to reporters at the White House, Biden said he hoped there would be an announcement by Friday of high-level meetings with Russia and major NATO allies to discuss Moscow's "concerns relative to NATO writ large" and the possibility of "bringing down the temperature along the eastern front."

The United States has voiced growing unease about a Russian military buildup near Ukraine, a former Soviet republic that has tilted toward the West since 2014. Moscow denies aiming to invade Ukraine and instead warns of a creeping NATO expansion eastward.

Biden said the United States had a moral and legal obligation to defend NATO allies if they are attacked, but that obligation did not extend to Ukraine.

"That is not on the table," Biden said when asked if US troops would be used to stop a Russian invasion of Ukraine.

"It would depend upon what the rest of the NATO countries were willing to do as well," Biden said. "But the idea the United States is going to unilaterally use force to confront Russia invading Ukraine is not ... in the cards right now."

He said he made it clear to Putin during their talks on Tuesday that there would be economic consequences like none before if Russia invades Ukraine, and that he is confident Putin got the message.

Biden warned Putin on Tuesday that the West would impose "strong economic and other measures" on Moscow if it invaded, while Putin demanded guarantees that NATO would not expand to the east.

Neither side spoke of a breakthrough after the two-hour video call but agreed to keep talking about what the Kremlin called "this complex confrontational situation."

"We agreed we will continue this discussion and we'll do it in a substantive way. We will exchange our ideas in the very near future. Russia will draw up its ideas literally in the coming days, within a week we will give this to the US side to consider," Putin told reporters on Wednesday.

In his first public comments since the conversation, Putin said it was "provocative" to pose the question of whether Russia planned to attack Ukraine, and again accused Kyiv and NATO of threatening Russia's security.

"We cannot fail to be concerned about the prospect of Ukraine's possible admission to NATO, because this will undoubtedly be followed by the deployment there of military contingents, bases and weapons that threaten us," he said.

It would be "criminal inaction" on Russia's part not to respond, he said. "We are working on the assumption that our concerns, at least this time, will be heard."

Biden is to speak with Ukrainian President Volodymyr Zelenskiy on Thursday to discuss the Russian military buildup and then convene a call with the leaders of the so-called Bucharest Nine group of Eastern European NATO allies, the White House said.

Russia, Ukraine and NATO have all stepped up military exercises as tensions have mounted in the past month.

Russia's Foreign Ministry said it had handed a note of protest to the U.S. Embassy over "dangerous" flights of U.S. and NATO military planes near Russia's borders.

Zelenskiy welcomed Biden's role in trying to attain peace in eastern Ukraine, where Ukraine says more than 14,000 people have been killed in seven years of fighting with Russian-backed separatists.

Ukrainian Foreign Minister Dmytro Kuleba told Reuters the talks between Biden and Putin had served the purpose of "deterrence and de-escalation".

A Russian Foreign Ministry official was quoted as saying the United States might be included for the first time in a group of countries working to end the conflict in eastern Ukraine.

RIA quoted the official, Oleg Krasnitsky, as saying there was no reason why the United States should not join the so-called Normandy grouping - comprising Russia, Ukraine, France and Germany - that has tried but so far failed to end the war.

"A lot depends on the position of Washington in settling the Ukrainian conflict. In principle, if the US is really ready to make a contribution, we've always been open to America exercising its influence on Kyiv," he was quoted as saying.

The remarks appeared to indicate that Moscow was open to an offer by US Secretary of State Antony Blinken last week for Washington to facilitate talks on the fighting.

Russia's Putin says US Afghan foray achieved nothing but tragedy

Russian President Vladimir Putin said on Wednesday that the US military intervention in Afghanistan had achieved nothing but tragedy and loss of life ...
News
9 months ago