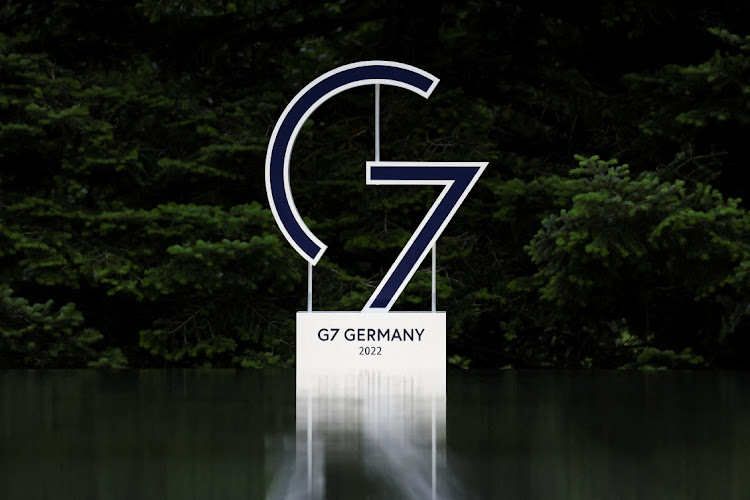 In South Africa, President Cyril Ramaphosa criticized US-led sanctions. Turkey concluded that penalizing Russia would be detrimental to Ankara’s economic and political interests, according to a senior official, who cited a $35 billion hit from higher energy costs and the impact on tourism.
Image: REUTERS/Lukas Barth/Pool/File Photo

When Group of Seven leaders gathered in the Bavarian Alps in June, they pledged to stand with Ukraine for the long haul.

Their Group of 20 counterparts are proving less supportive.

Comprising nations that account for some 85% of global economic output, the G-20 is supposed to be more reflective of the world. Yet only half its number has joined the international sanctions imposed on fellow member Russia over its invasion of Ukraine.

Senior officials from the smaller group of wealthy nations have been travelling the world to make the case for a tougher economic net around Russia. They’ve been surprised by the lack of sign-on from G-20 states, even if those countries aren’t going out of their way to help Moscow circumvent the penalties.

It’s an uncomfortable reality confronting Secretary of State Antony Blinken during his extended tour of Southeast Asia and Africa: Much of the world isn’t ready to follow US and European efforts to isolate President Vladimir Putin’s Russia.

That makes agreement on global initiatives such as a cap on Russian oil prices as proposed by the G-7 even more challenging, while emboldening Putin and his key supporter, Chinese President Xi Jinping, in pursuing their respective global agendas. 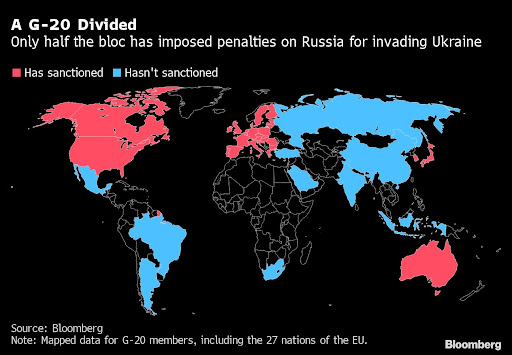 While the US and its allies have sanctioned Russia for its invasion of Ukraine, half of the countries in the Group of Twenty have not signed up.
Image: Bloomberg

The biggest opt-out is China. Xi joined hands with Putin and declared a “no limits” friendship just weeks before Russia invaded Ukraine. China’s outlays on Russian oil have soared since the war’s outbreak — it spent 72% more on Russian energy purchases in June from a year earlier.

China is in any case locked in a rivalry with the US, with tensions spiking this week over House Speaker Nancy Pelosi’s visit to Taipei, and in its own dispute with the G-7 after the bloc issued a statement expressing concern about Beijing’s “threatening actions” around Taiwan.

A face-to-face meeting planned between the foreign ministers of China and G-7 member Japan this week in Cambodia has been called off by Beijing. Japan said late Thursday that some ballistic missiles fired by China during drills near Taiwan had landed in its exclusive economic zone — the first time that had happened — and lodged a diplomatic protest.

But Beijing is far from alone in rejecting the pleas to rein in the Kremlin. Indian Prime Minister Narendra Modi spoke over the phone with Putin on July 1 and discussed how trade could be built up. Luiz Inacio Lula da Silva, the front-runner in Brazil’s presidential race, laid the blame for the war on Ukraine as much as Russia. 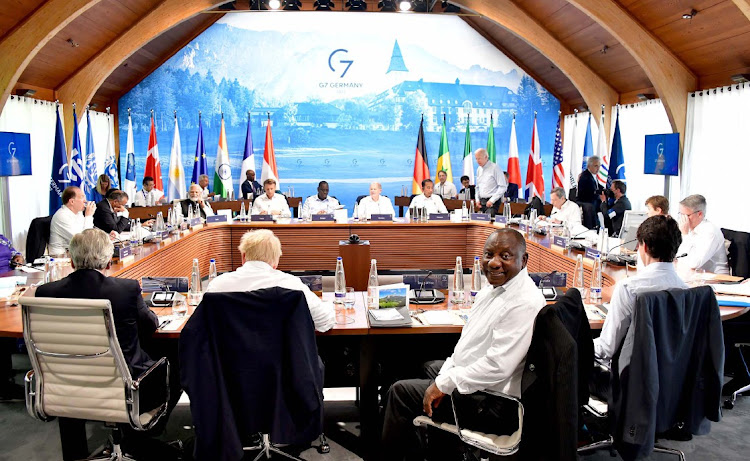 President Cyril Ramaphosa with Heads of State/Government from G7 countries, invited Heads of State/Government from Argentina, India, Indonesia, Senegal and representatives of International Organisations, in a Working Session on Investing in a better future: Climate, Energy and Health, during the G7 Leaders’ Summit in Schloss Elmau, Bavaria, Germany.
Image: Elmond Jiyane

In SA, President Cyril Ramaphosa criticised US-led sanctions. Turkey concluded that penalising Russia would be detrimental to Ankara’s economic and political interests, according to a senior official, who cited a $35 billion hit from higher energy costs and the affect on tourism.

Economic imperatives are one reason for the reticence among what is often termed the Global South. But there are others, including historic affinities to Moscow, concerns at signs of US disengagement and a distrust of former colonial powers that fuels a sense of hypocrisy.

There are parallels with China and the US-led efforts to create a coalition of democracies against Beijing. US Commerce Under Secretary Alan Estevez said in July that Washington’s collaboration with 37 nations to impose export controls on Russia served as a blueprint for a new system of tackling threats from China.

Here, too, the US and like-minded nations can point to only limited success, since G-20 members including this year’s host Indonesia continue to sign big deals with Chinese state-owned companies, while the balance of trade remains in Beijing’s favour.

Take Saudi Arabia, which remains on good terms with Moscow through their involvement in the OPEC+ oil cartel. It’s also friendly with Beijing: Crown Prince Mohammed bin Salman said recently that many Chinese companies are already doing business in Neom, his flagship megaproject.

Riyadh doesn’t have to choose between American and Chinese technology, “in the same way that you can have a McDonald’s and a Burger King on the same street,” Saudi Ambassador to the US Princess Reema bint Bandar told reporters during President Joe Biden’s visit last month.

That kind of pick-and-mix approach to foreign policy has set up a competition for influence. German Chancellor Olaf Scholz pointedly invited Argentina, Indonesia, India and SA, none of whom have sanctioned Russia, to his Ukraine-focused G-7 summit in late June.

The soft power tussle was on show in Africa last month, when Russian Foreign Minister Sergei Lavrov won praise for Moscow’s nuclear power technology. He used the opportunity to stress Russia’s historic support for African liberation movements, while making the case that sanctions were to blame for food insecurity rather than a Kremlin blockade of Ukraine’s grain ports that is only just starting now to ease.

Moscow has backed up that message with a media barrage. French President Emmanuel Macron, on his own Africa tour, denounced Russia for conducting “a new kind of hybrid world war” on the continent.

It’s been a similar playbook by China in Africa. An African country alternates with China in hosting the triennial Forum of China Africa co-operation, which the Chinese president traditionally attends and meets one-on-one with almost every head of state. When the FOCAC is held in Beijing the red carpet is rolled out, with tiny Equatorial New Guinea treated with equal importance to Nigeria — a level of attention absent in Washington.

China knows that each African state has one vote at the United Nations and its institutions, and that’s paid off diplomatically. Earlier this year, the US submitted a letter decrying China for alleged human rights abuses in Xinjiang to the Human Rights Council with 47 signatories, mostly European allies. Cuba responded with a statement on China’s behalf backed by 62 countries, mostly in the Global South.

Blinken’s decision to travel from Asia to SA on Aug. 7, then the Democratic Republic of the Congo and Rwanda, looks like an attempt to regain the narrative against not just China but Russia, too.

The ruling ANC in SA has close business ties with Russia. Billionaire oligarch Viktor Vekselberg was the biggest donor to the ANC in a recent quarterly disclosure and Chancellor House, the ANC’s investment company, owns a stake in his manganese mine in SA.

Biden said he’ll welcome African leaders to Washington in December for a summit that will “build on our shared values to better foster new economic engagement.” As well as tackling pandemic readiness, climate change and food security, the meeting will “reinforce the US-Africa commitment to democracy and human rights,” Biden said.

As Japan faces its first major battle with inflation in decades, Prime Minister Fumio Kishida is extending a rare olive branch to labour unions, who ...
News
1 week ago

Yet according to Maria Repnikova, associate professor in global communication at Georgia State University, China’s pragmatic use of soft power — centred on education and jobs, while showcasing its tech advances and progress in cutting poverty — often resonates more in the Global South than the US focus on values.

Moscow meantime is using “different ways of appealing and speaking for and with the Global South as an advocate for them,” Repnikova, the author of “Chinese Soft Power,” said in an interview. It’s less than China’s reach, she said, but they’ve been “working a lot on their competition of narratives,” through social media and diplomatic language.

That kind of approach doesn’t just apply to Africa, Repnikova said, but to Asia and Latin America, where Russia supplied nations with its Covid-19 vaccine and China is investing heavily.

In a rare snub to Ukraine, the South American trade bloc Mercosur declined a request by President Volodymyr Zelensky to address its summit in late July.

In Indonesia, President Joko Widodo has maintained traditional non-alignment in the face of pressure to exclude Putin from the G-20 summit in November. He’s invited both the Russian and Ukrainian presidents to Bali.

While Jokowi travelled to Moscow and Kyiv, China’s Silk Road Fund signed a deal to invest as much as $3 billion in Indonesia’s new sovereign wealth fund. It was the largest single investment by China recorded worldwide by IntelTrak’s Belt and Road Monitor for the July 1-15 period.

To Repnikova, recent events show how competition for influence is becoming more entrenched. That leaves little chance of mobilising states to shift their positions —“ unless something very significant is offered.”