Can government legislate to resolve the problem of lawlessness around mines? 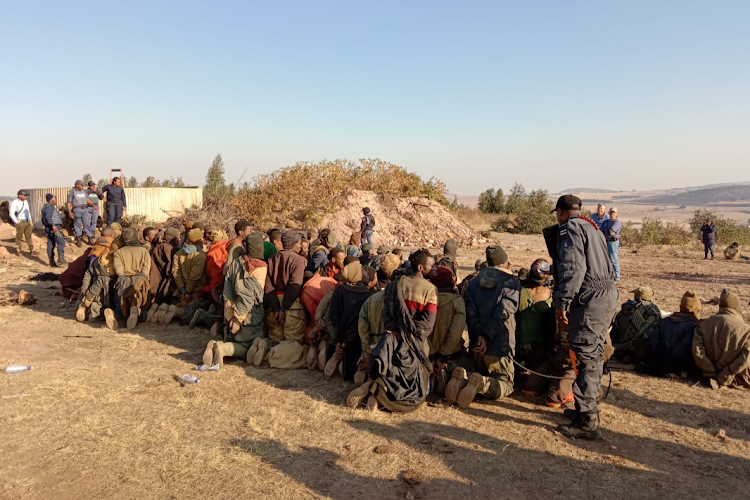 Police are cracking down on illegal miners after the Krugersdorp mass rape, with the suspects alleged to have originated from a nearby zama zama operation. File photo.
Image: SAPS

While police arrest scores of illegal miners for immigration law violations in the wake of the Krugersdorp rapes , the conversation around how to regulate the informal mining sector intensifies.

This after about 700 tonnes of gold-bearing material valued at about R2.5m was found in five illegal plants uncovered in Krugersdorp, west of Johannesburg, when police descended on the area following the rapes of eight women at a disused mine, said Hawks spokesperson Lt-Col Philani Nkwalase.

The mineral resources department published an Artisanal and Small-scale Mining Policy in March, under which permits will be issued only to South Africans or permanent citizens.

It seeks to criminalise the current operators, known as zama zamas, many of whom hail from Lesotho and Zimbabwe, working some of the estimated 6,100 mines designated as “derelict and ownerless”.

“Communities are directly affected by the scourge of illegal mining activities in terms of environmental degradation, health risks and gang violence emanating from rival illegal miners,” the draft states.

“Illegal mining should be distinguishable from artisanal and small-scale mining by people who genuinely want to participate in the industry to improve their livelihoods and contribute to the economy and growth of the industry.”

The policy gives preference to co-operatives and concessions due to their potential to maximise projects and share the risks.

Acknowledging the need to investigate incentives, it argues legalisation will allow permit-holders access to small business finance and venture capital.

While government proposes to tax permit-holders, it said they may be eligible to benefit from the small business incentive regime which offers graduated tax rates ranging from zero to 21%.

Only surface mining operations will be allowed.

David van Wyk, chief researcher at the Bench Marks Foundation, said though the white paper has good intentions, the real challenge will be implementation.

“It’s the first step forward to show government is considering doing something about the problem, but it is a little late.

“We contributed our views in the draft and we find the proposal to restrict small-scale permits to South Africans polarising. It should include everyone who knows about mining and wants to take part. We agree we need to draw a distinction between illegal miners and people who are genuinely in this to make a living, but government needs a plan to ensure others get opportunities too,” said Van Wyk.

Regarding where they can operate, Van Wyk said government is setting them up for failure.

“It is unfair because they get the minerals underground and not on the surface. We have always told government to cluster the zama zamas into groups of at least five operations per area and create an environment where they can sell their products and contribute through tax.

“With that money, a fund can be created and industry safety specialists hired to ensure safety and regulation of the small-scale miners.”

The six bullets pulled out of the body of 65-year-old KwaZulu-Natal grandmother Fikile Ntshangase this week are a stark reminder of the diabolical ...
Opinion & Analysis
1 year ago

In a previous report, Van Wyk proposed they be organised into co-operatives and the co-operatives be registered with the industry and mineral resources department. A central buying agency for the product should then be set up.

The paper proposes the presence of the zama zamas be addressed properly to eliminate illegal mining activities.

“A transitional period for all illegal miners to come forward and subject themselves to the process of formalisation must be explored.

“If the illegal miners do not take advantage of this transition window, law enforcement agencies will have to step in,” reads the draft.

The SA Human Rights Commission (SAHRC), which issued a report after an investigative hearing into unregulated artisanal mining in 2015, highlighted the absence of enforcement around mine closures and the ambiguous regulation that prevails.

This week the commission said it will engage government to gauge progress on implementation of the recommendations it made on mining challenges.

Among the recommendations was that police officers tasked with illegal mining sting operations should undergo proper training to professionalise their interventions.

The SAHRC criticised mine owners and former mine owners for not rehabilitating and securing access to mining tunnels, dumps and the surrounding environment.

“They need to be brought into the equation and asked to bear some of the burden of addressing both environmental and social consequences of their operations, even where their mining operations have ceased.”

After 1994 we threw open our doors to all-comers; now we’ve had enough they must all head back to where they came from
Opinion & Analysis
3 days ago

Community members from Kagiso, near Krugersdorp on the West Rand, on Thursday took matters into their own hands to remove illegal miners operating at ...
News
3 days ago