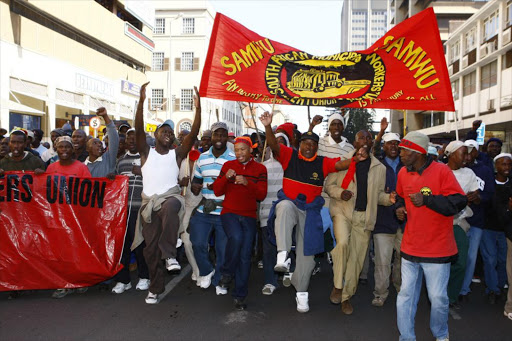 Municipal services across the country will come to a standstill tomorrow as 300000 workers go on strike.

The trade unions are demanding an 18% or R2000 increase in wages while the employer has offered only 6.08%.

Workers from the water sector will join in on the protest action after failing to come to an agreement with the employer association.

Trade union bosses said 262 municipalities would be affected, with services including refuse and revenue collection coming to a halt.

The stalemate in negotiations came amid accusations by union negotiators and leaders that the employer was negotiating in bad faith. They hoped Salga would reconsider its offer.

But Salga spokesman Milisa Kentane has raised concerns about the unions' demands, saying municipalities could not afford such increases.

And meeting the 18% demand from the unions would cost the City of Johannesburg an additional R829-million a year, said Kentane in a statement.

Samwu general secretary Mthandeki Nhlapo said their 220000 members would picket outside their work places as from tomorrow, with Imatu's 70000 members joining the action later in the week.

"We did not take the decision to strike lightly. We discussed at length and exhausted all avenues of bargaining available."

Imatu general secretary Johan Koen said members hoped that the strike would force the employer to review their offer.

"We call on the employer to stop acting in bad faith and to join us at the negotiating table."