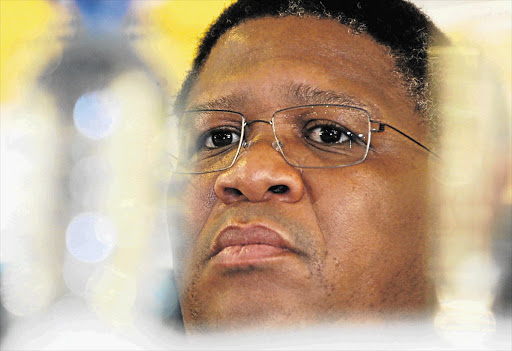 The league said their confidence and respect for Mbalula was built over time and would never fade because of the "unfortunate" incident. "Comrade Mbalula is undoubtedly one of the best leaders of the ANC, a great mobiliser and organiser for progressive change. [He] gives energy and oomph to every responsibility assigned to him," said spokesman Floyd Shivambu in a statement.

Shivambu said Mbalula's humility and courage in accepting he had erred and in publicly apologising to his family, the ANC and the country, should be celebrated.

Newspapers widely and graphically reported that Mbalula was the victim of extortion at the hands of a woman he had an affair with and who claimed she had been impregnated by him.

In a statement on Sunday, Mbalula apologised to South Africans and asked for his privacy to be respected.

He said claims by the woman, identified in reports as Joyce Omphemetse Molamu, that she was pregnant "remain unproven to me".

"I have consulted with my family and provided them with information and explanation for my acts and omissions in regard to the allegations that are swirling in the media," Mbalula said.

"I have apologised to my family, particularly to my wife, as I should have known better.

"I have been trying to deal with this matter, in a private manner, for the past three months and when it became clear to me that this woman was prepared to extort money from me, I then decided to cease all communication with her as I was not prepared to be blackmailed."

Mbalula unsuccessfully approached the High Court in Johannesburg on Saturday to prevent the details surrounding the affair from being published.

He became aware that this was a possibility when The City Press newspaper sent him questions relating to the matter.

However, his court application could only be heard at 6pm -- the print deadline of the paper.

Mbalula -- who has decided not to lay any charges against Molamu for "extortion or blackmail" -- said he regretted subjecting his family to the media allegations and speculation.

"I apologise to the South African society, to the African National Congress and the South African government. From now onwards this matter shall be dealt with as a private matter by my family." It was reported that Molamu allegedly demanded R40,000 from Mbalula. The league said it hoped that South Africans would accept Mbalula's apology instead of passing unfair judgments.

"Let us all judge Mbalula according to his work, not on the fallibility of his being, which he accepted and sincerely apologised on."