Malema will not share stage with Zuma at celebrations 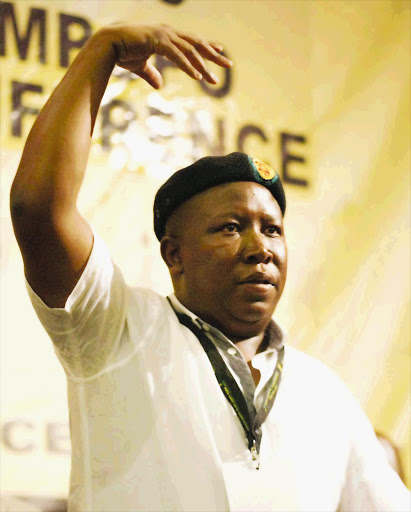 Malema would address mini-rallies around the province instead, she told journalists on Wednesday.

“We don’t have the possibility to entertain any delivery of any messages of support in the programme on the 8th (Sunday)," she said.

"Messages of support from all leagues, alliance partners, other friends from the fraternal parties and those from the international communities will be compiled into a booklet."

The booklet will be circulated to the 100,000 people expected to attend. The ANC’s leagues traditionally delivers messages of support at such events.

Last year, reports suggested that plans were made to ensure that Malema did not share a stage with Zuma.

He has been seen mocking Zuma as the "shower man" at the Limpopo provincial conference, where he was elected among 20 provincial executive committee members.

Malema and other anti-Zuma groupings were seen with their hand above their heads symbolising a shower head.

In an earlier statement the youth league said Malema would address three "mini-rallies" in the Free State on Thursday and Friday to commemorate the league's contribution to the ANC over the last century.

Malema would at these rallies reflect on "the important role of youth in the ANC throughout its history, and contextualise the current struggles of the ANC Youth League within that context," league spokesman Floyd Shivambu said in a statement.

He was expected to speak at the Welkom community centre at 5pm on Thursday and at Moroka High School in Thaba Nchu at noon on Friday, and in Bloemfontein at 4pm.

Mbete said the rallies had received a stamp of approval from the mother body. These were part of a directive from the ANC for structures, including the youth league, the ANC Woman’s League, and its veterans, to galvanise support on the ground, she said.

“They are not doing their own thing. They are doing the work that the ANC must focus on in different structures leading on the centenary weekend.”

ANC national executive committee members were expected to visit all the regions in the Free State until Saturday, to ensure party supporters attended festivities.

The centenary festivities were also seen as a preview of the ANC's elective conference in Mangaung in December, where loyalty for Zuma would be tested.

Former president Thabo Mbeki confirmed his attendance for the centenary celebrations on Tuesday.

This was the first time Mbeki would be present at an ANC event of this magnitude since his ousting from the presidency in 2008.