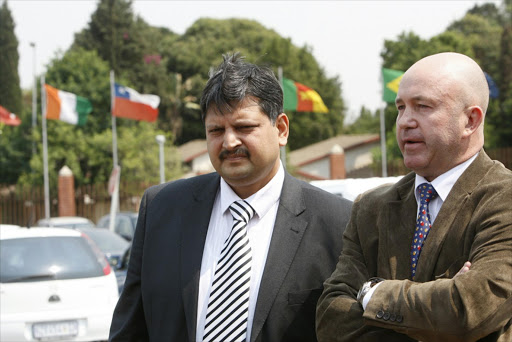 Billionaire businessman Atul Kumar Gupta with his Attorney Cliff Alexander, after his obstruction of Justice case was dropped at the Radburg Magistrate Court in Johannesburg in 2010.
Image: Antonio Muchave

The Gupta Family and Oakbay Investments are delighted to have been cited in the application from the Finance Minister Pravin Gordhan‚ their lawyer says.

"At last‚ the Gupta family and Oakbay can begin to formally clear their names. They thank him for this opportunity‚" Van Der Merwe Associates said in a statement.

The law firm said there were fundamental flaws in the papers flagging 72 transactions.

- Six transactions (totalling R4‚096 billion) refer to the Optimum mine before it was under Oakbay’s control and so were not transacted by Oakbay or the Family;

- 24 transactions (totalling R325 million) are perfectly legitimate‚ are in the normal course of business and are not suspicious in any way;

- Five transactions (totalling R1‚698 billion) relate to Oakbay Resources and Energy‚ the listed entity. These are perfectly legitimate and all information is being supplied to its auditor‚ SizweNtsalubaGobodo‚ for review;

- Another 20 vaguely refer to ‘multiple transactions’ that makes any further analysis impossible without further detail from the Finance Minister;

- The remaining 17 transactions (totalling R719 million) were also all for legitimate purposes and are absolutely not suspicious. "We will disclose these transactions in full‚ once the full analysis has been completed.";

- All of the 72 transactions were approved and cleared by the respective banks processing the transactions;

- The fact that all transactions were approved is acknowledged in the attachment to Minister Gordhan's application‎‚ in the form of a signed letter from the Deputy Governor of the Reserve Bank;

- None of the transactions related to Oakbay or the Family‚ which are over a five year period‚ were flagged to the Financial Intelligence Centre as suspicious. "To put this in context‚ the FIC’s own 2015-16 Annual Report showed that 98‚054 transactions in that year alone were flagged as suspicious by the banks";

- One of the largest transactions flagged in Minister Gordhan’s application was the transfer of the Optimum Rehabilitation Trust’s Account (over R1.3 billion) from Standard Bank to the Bank of Baroda. Yesterday‚ we proved this was bona fide and approved by all relevant authorities (pdf attached). The transfer occurred because all of Oakbay’s accounts were being closed.

"To reiterate‚ we are delighted to have received this application. The truth always comes out in the end and we look forward to clearing our name in court."