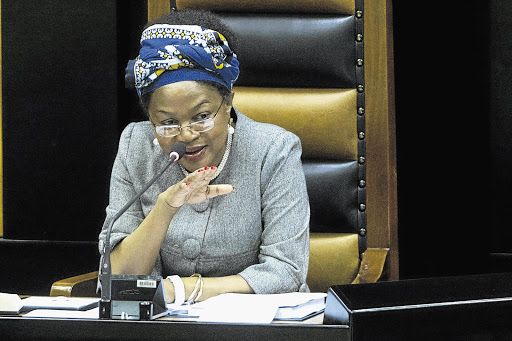 Speaker of Parliament Baleka Mbete says a commission of inquiry into the "monster" of state capture is "desirable".

Mbete was briefing the media ahead of Parliament's budget speech on Tuesday.

"I believe it is desirable to have a commission of inquiry into all areas of state capture broadly‚ so that we can settle our minds and get on with our lives. For now‚ there's nothing‚ but there will be.

It means there will be a structure that will probe into whatever you understand by state capture and what effect it has had on South African society over time and of course when that structure is formed‚ it will determine its time frames and terms of reference‚" she said.

"We will all sleep well once we know that we are having some people paying attention to this monster."

ANC secretary-general Gwede Mantashe also announced that the ANC NEC had accepted a proposal that a judicial inquiry be launched without delay.

Democratic Alliance leader Mmusi Maimane earlier said the party had written to Mbete to request the establishment of an ad hoc committee to probe allegations of state capture against President Jacob Zuma in the wake of the release of the Gupta emails this weekend.

Deputy Speaker of Parliament Lechesa Tsenoli said the request had not yet been received; only the National Assembly could make the decision to establish some sort of inquiry.

He said that "any structure that will inquire into issues of state capture is absolutely welcome" but "how and when that happens depends on the response of the affected".

Maimane said that Parliament needed to play its role in holding the executive to account and as such the party was calling for an ad hoc committee to be established to investigate all the claims around state capture.

He said the committee needed to use its power to subpoena Zuma‚ the Gupta family and others with knowledge of state capture‚ like Pravin Gordhan and Mcebisi Jonas‚ to testify.

Maimane said Zuma and the Guptas were acting like the "mafia" and creating a "shadow state". The ANC NEC's inability to recall Zuma over the weekend proved that state capture was "in fact an ANC project" because they chose "to protect a criminal syndicate".

Maimane said the ad hoc committee would not detract from the party's cases currently before court — one to compel Zuma to give his reasons for his cabinet reshuffle and the firing of Pravin Gordhan as finance minister‚ and the other to oppose Zuma's attempts to use the courts to review and set aside the Public Protector's recommendations and remedial action‚ which call for a judicial inquiry.

Maimane said the party would also lay criminal charges against Zuma and certain cabinet ministers within the next 24 hours.

He said they were still taking direction from lawyers about what these charges would be‚ but leader of the party's federal executive James Selfe said they could include corruption and racketeering and potentially even treason.

"When you undermine the sovereignty of a sovereign state that could be treated as treason‚" he said.