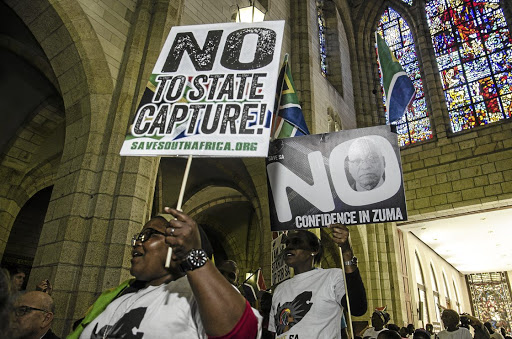 A dissident group of ANC stalwarts and veterans has urged the party’s MPs in an open letter to save the ANC by voting in support of the impending motion of no confidence in President Jacob Zuma in Parliament this week.

It said that the personal decision ANC MPs made in this vote of no confidence would not simply be judged in the weeks to come‚ but would be written into the history‚ not only of the country but that of the ANC as an act that struck a blow for the rescuing of the ANC.

In this instance‚ saving the ANC would not be antithetical to voting in support of the motion‚ the group said‚ adding that self-correction had to go beyond mere statements and was about making tough decisions.

With Parliament preparing itself for one its most important sessions since the country’s young democracy came into being‚ it said‚ the eyes of the nation and indeed of all democrats would focus on each and every one of the ANC MPs who would take their seats on that day‚ ready to make their mark in the history books.

“The guideline of how you should approach your role on the day‚ as required of you in terms of the Constitution of the Republic was outlined in the clearest of terms by the Chief Justice in the Constitutional Court determination regarding whether the Speaker had powers to provide for a secret ballot during voting on the motion of no confidence against (in this case) President Jacob Zuma.

“As Stalwarts and Veterans of the ANC‚ we acknowledge that this will probably be one of the most important‚ if not difficult‚ ballot you are called upon to cast your vote in. However‚ your burden should be made easier by the covenant you struck with the people of South Africa when you swore allegiance to the Constitution and‚ as a member of parliament‚ pledged never to conduct yourself in manner that will diminish its integrity and thus that of the republic of South Africa‚” the group wrote.

The letter continued: “Now we know that the sanctity and security of the state are under direct attack from a felonious nexus of politicians‚ state officials and privateers. We are witness to larceny on a grand scale‚ leaving the country not only impoverished‚ but also increasingly in the hands of criminalised and compromised governance.

“The stench of corruption is deep and broad. That this has and continues to damage the ANC’s electoral prospects is no longer in doubt. Whether our organisation can retain and regain the confidence of broader society will be determined by its ability to rid itself of the cancer of the political and economic corruption aided and abetted by key elements within the organisation.

“We know you must share the concern that there has been a widespread failure of legislatures to hold the executives to account‚ as well as the failure of ANC structures to maintain relevant oversight‚ which has led to a vacuum that the opposition has just been too happy to fill.

“The motion of no-confidence in President Jacob Zuma is an inevitable outcome of the myriad scandals in which he has regrettably embroiled himself and his office and which continue to dog him and his executive‚ with ongoing revelations that leave little doubt as to their veracity.

MPs must weigh the consequences - and the message they will send

Who would want to be in the shoes of an ANC MP as parliament's ninth no-confidence debate on President Jacob Zuma takes place in the National ...
Opinion & Analysis
4 years ago

“To replace the obligation of advancing the ANC’s historic mission with the burden of defending the unacceptable and indefensible is inconceivable‚ but sadly that is the reality you are confronted with. But when the time comes for you to cast your vote on the motion of no confidence‚ it will ultimately come down to your own personal commitment to our country‚ and consequently the ANC‚ and a recognition that you are prepared to uphold and to help and contribute to the restoration of the highest ethical standards and values society expects of our organisation and its parliamentarians.

“It is for this reason that as Stalwarts and Veterans of ANC we found it completely un-ANC and egregious for leaders of the ANC to be conducting political witch-hunts against those who’ve risen to the challenge of speaking out and becoming voices of conscience‚ and demanding accountability of the president and their organisation.

“To infer‚ as no less a person than the SG of our organisation has done‚ that theirs is a ‘new-found conscience’‚ is malicious and reflects a singular inability or refusal to appreciate what it would take for good ANC comrades to do what they’ve done. Even more ludicrous is to seek to hide behind disciplinary action which will achieve nothing but serve to avoid the real issues that these comrades and many others are raising.

“So‚ as you approach the moment of truth‚ please appreciate that the personal decision you make in this vote of no confidence‚ will not simply be judged in the weeks to come‚ but will be written into the history‚ not only of the country but that of the ANC as an act that struck a blow for the rescuing of the ANC.

“Self-correction has to go beyond mere statements; it is about making the tough decisions which history from time to time places on the shoulders of true patriots. In this instance‚ saving the ANC would not be antithetical to voting in support of the motion.”