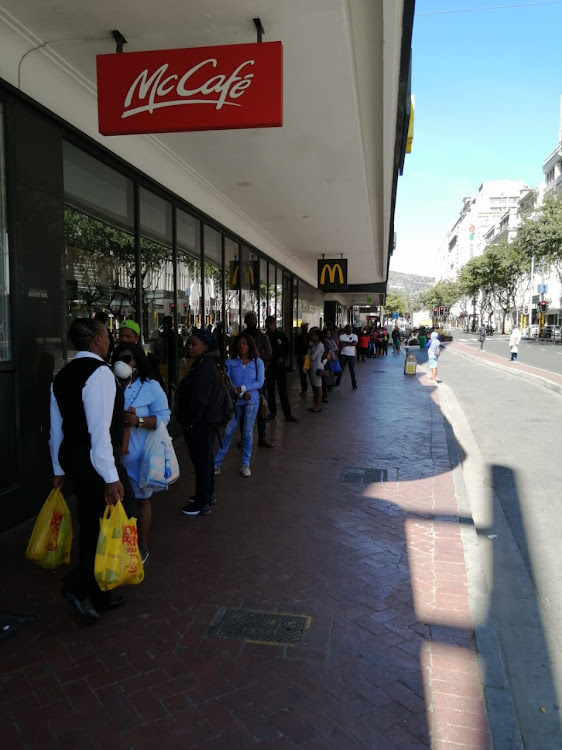 Shoppers in Cape Town on the first day of the nationwide lockdown.
Image: Aron Hyman

Transport minister Fikile Mbalula has conceded that there were a number of challenges that had presented themselves on first day of the nationwide coronavirus lockdown.

Lockdown regulations state that minibus taxis and e-hailing services can only operate for a total of eight hours a day, primarily for the use of essential services workers. These are from 5am to 9am and from 4pm to 8pm. The public transport vehicles were also not permitted to reach full capacity.

But Mbalula admitted on Friday evening that many commuters were left stranded after waiting in long queues. He said that this was in part due to some in the taxi industry not playing their part.

“The first challenge was that of the long line of queues, where the taxi industry did not come to transport people. Those long queues must be addressed. There were also challenges in application of how many people can be in a taxi at a time — and we have clarified that it can only be 60%. Anything above that undermines what government is trying to achieve [by the lockdown],” he said.

Some in the taxi industry have cried foul over the move to limit the number of passengers in taxis without any subsidy for the loss of income.

Mbalula did not rule out that some amendments could be made to the regulations around operating times, but said that it did not make sense to make the changes in haste on day one.

Responding to the use of public transport for those wanting to buy essential items, the minister said that people needed to shop within their immediate spaces. He said people must not travel long distances.

“We are discouraging people from doing that. It is a huge issue for us. My answer is [to] limit the movement. Stay where you are and don’t go far away to get what you can get in the spaza shop down the road,” he said.

He said that law enforcement had also been beefed up at major provincial entry points where some were seeking to defy the call not to move between provinces.

Police minister Bheki Cele said there had been 172 roadblocks set up around the country manned by 24,000 people made up of SAPS officers, metro police, traffic police and the SA National Defence Force.

Cele also acknowledged that there needed to be clarity on when people were allowed to go to the shops for essentials.

“One of the issues is shopping for groceries and we are finding an answer to that, and soon we will know how to handle it. There is indeed a shortcoming there when it comes to long queues [at shops]. People are not observing social distancing.

“In some cases we also find that there are people who are going to shops for an outing and not for shopping because there are no other activities for them to occupy themselves with. We are sifting through those things and we are going to be very tough over the next 21 days,” he said.

All air and rail travel have been completely shut down for the duration of the lockdown, with the exception of the movement of essential cargo.

Only one person has died from Covid-19 in SA, the health ministry said on Friday night.
News
1 year ago

Reverend Kenneth Meshoe, the leader of the African Christian Democratic Party, has tested positive for Covid-19.
Politics
1 year ago