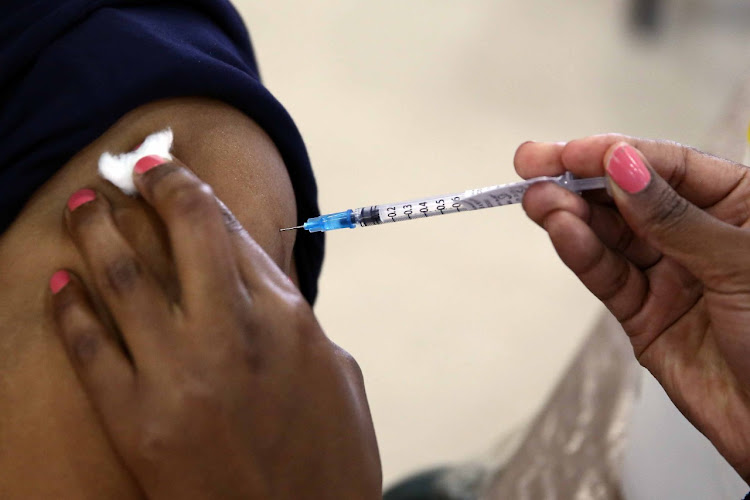 As SA gears towards vaccinating up to 250,000 people a day during the peak of the second phase of the Covid-19 vaccination programme, health minister Zweli Mkhize said discussions about establishing a 'no-fault compensation fund' were under way.
Image: Thapelo Morebudi/Sunday Times

The minister said while the focus was on ramping up the current vaccine rollout — and aiming towards being able to vaccinate 250,000 people a day at the peak of the rollout — there were also discussions into other aspect of the vaccine programme.

The “no-fault compensation fund” would allow those who may suffer permanent damage as a result of the Covid-19 vaccination to be compensated.

“It's a concept that, basically, says anyone who might suffer harm or adverse effects after immunisation should report it. And if there is an indication of damage, how does such a person get compensated? So it’s a protection to South Africans,” he said.

Mkhize said that this would entail having a place available for South Africans to report any adverse affects.

“It's going to have a team that will receive the complaints ... Secondly, it will have a team of specialists who will evaluate whether the injury is real and linked to the vaccine that government actually procured. It's important to say that because we can't get people distributing [a] fake vaccine and then they come and claim from this fund. We are not going to do that, it needs to be linked.

“That's why we are procuring [the vaccine] and its going to be distributed to industries, [and the] private sector, because we know it is safe for our people,” he said.

If established, the fund will be administered by a retired judge, which would allow for matters to be concluded fairly, Mkhize said.

“What is a must-have is an ease of access so that people don't need a lawyer to get there. People must be able to get there, fill out their forms and get assessed. It must also be easy to get compensation from, so we don't need to tussle about it. So there must be a way of saying, if you have this type of challenge, this is the kind of compensation [one must receive].

“The only thing that remains for lawyers and courts is when somebody does not agree with the ruling, therefore there is a review process which makes it much easier because most of the people would have been covered and protected. Of course the manufacturing companies are wanting to make sure that themselves are protected, but we believe it is a good approach. In fact, as far as we are concerned, this is the kind of a no-fault compensation fund we need to build and grow for the rest of the medicolegal cases we face in the country,” he said.

Health minister Dr. Zweli Mkhize updated the nation on the vaccine rollout in a media briefing on April 8 2021 in Soweto. Mkhize cleared issues around the AstraZeneca vaccine and the possibility of adopting a Covid-19 vaccine passport.

While SA had only vaccinated 278,909 health-care workers since the start of the first rollout, Mkhize said the goal of vaccinating 250,000 to 270,000 per day was not ambitious.

“We won't achieve that in the first few months. It will be something that we will achieve later on, when most sites have opened and the flow of vaccines is no longer delayed,” he said.

Mkhize was addressing members of the media at Soweto after assessing the state of readiness at three vaccinations centres ahead of the next phase of the vaccination plan due to commence on May 17.

He announced that the country had procured a combined 51 million doses of vaccines; 31 million of Johnson & Johnson's one-dose vaccine and 20 million of Pfizer’s two-dose vaccine.

Asked about the country's stance on vaccine passports, Mkhize said this was also being investigated.

“We have seen that it's something that has been adopted in Kenya. A couple of people have come to show us some concepts around vaccine passports. In fact, the Africa Centre for Disease Control has already approached us to show what they are doing, and we've got a team that's working on it.

“Once we have got the matter investigated and concluded, we will revert,” he said.

Health minister says government believes it will achieve target of vaccinating about 250,000 to 270,000 citizens a day
Politics
1 year ago

One of the glaring lessons highlighted by the Covid-19 pandemic is the urgent need for universal health coverage to ensure no one is left behind, the ...
Politics
1 year ago

The Serum Institute of India has fully refunded SA for 500,000 doses of the AstraZeneca Covid-19 vaccine which had not yet been delivered, health ...
News
1 year ago