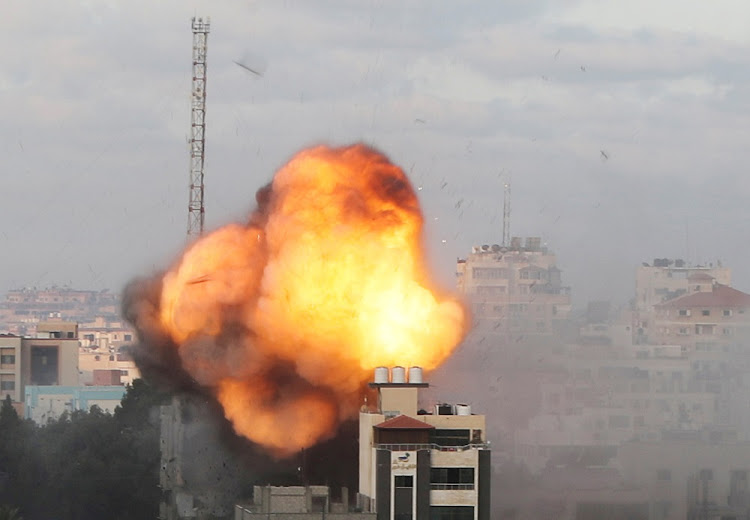 Smoke and flames after an Israeli air strike amid a flare-up of Israeli-Palestinian fighting in Gaza City.
Image: Mohammed Salem/Reuters

The Israel-Palestine conflict dominated the international relations and co-operation department's budget debate on Thursday, with MPs split on their support and condemnation of both sides.

Opening the debate, minister Naledi Pandor reiterated SA's support for Palestine, saying this country was pleased to be serving in the UN Peace-building Commission for 2021/22 as this would contribute to the maintenance of international peace and security.

“The recent vicious attacks by Israel on Palestinian people and the forced removal of Palestinians from their homes is clear evidence of the absence of peace and security for millions worldwide,” said Pandor. “Sadly, we all watched as Palestine suffered more and more brutally. Greater effort must be exerted to achieve peace in the Middle East.”

The minister said powerful nations had to accept that all countries depended on each other, and that even the most powerful would not achieve peace and security through unilateral actions and neglect of the poor, the oppressed and the marginalised.

“We call on the UN and the Gulf Council to be more resolute in pursuing freedom for the people of Palestine,” she said.

Pandor said SA's focus in international relations included promotion of the values and ethos of SA's constitution through advocating for human dignity, democracy and equality.

She said the cruel bombings and killings of the innocent over the past two weeks are a sad testimony of the cruel impunity the world has granted Israel.

Pandor called on the international community to stop the impunity, saying SA should support the International Criminal Court in the planned investigation of the abuse of human rights by the Israeli government.

“We hope sanctions and other measures to show the world's offence at this brutality will soon be evident,” said Pandor.

Her views were shared by ANC MP Tandi Mahambehlala, who chairs parliament's portfolio committee on Dirco. Mahambehlala said self-determination for the people of Palestine was now more urgent than ever.

“The flagrant impunity and total disregard by Israel, of lives of Palestinians, especially women and children, must be condemned with contempt. If what we have witnessed in the past 10 days is not tantamount to apartheid, then nothing will ever be,” said Mahambehlala.

“We associate ourselves with the statement by President Ramaphosa in support of the Palestinian people. We call for the right to self-determination for the people of Palestine and the end to the Israeli bombardment of Gaza,” she said.

For the EFF's Thembi Msane, the ANC government was not doing enough in showing solidarity with the people of Palestine.

“Beyond the usual rhetoric condemning the criminal state of Israel, and the murderous conduct of Benjamin Netanyahu, the country has not done anything that will materially show our support to the people of Palestine,” Msane said.

She said while the UNSC met a few days ago, in a meeting that was requested by China to debate the killings of Palestinians by the “apartheid state of Israel”, African leaders had chosen remain silent on the matter.

“SA is continuously making meaningless noise here in the country, but continues to house Israel within our borders and on our land,” she said.

The DA's Darren Bergman called for peace and calm in the Middle East, saying they placed value on all lives and that the DA reiterated its call for a two-state solution. Bergman accused SA of dithering in clarity between its internal culture and its external policies.

“When it comes to being the champion of human rights it would be more credible and appreciated if SA was consistent.

The FF Plus's Corne Mulder criticised Pandor and the ANC's pronouncements of full solidarity with Palestine, especially after President Cyril Ramaphosa had indicated that SA was prepared to mediate in the conflict.

“You said we all watched the vicious attacks by Israel on Palestine and then you said we stand in full support of Palestine — but minister, you did not say a single word about the fact that more than 4,000 rockets were fired at civilians in Israel and not only on Israeli Jews but on all citizens.”

“You should understand that SA has zero influence or credibility in the Palestine- Israel conflict. Israel is not the former New National Party, they do not have a death wish, they did not plan to commit suicide and they do not want to surrender,” he said.

“If you understand that, then don't expect any call soon from the Middle East for SA to mediate, you have no credibility whatsoever. You have sided with Palestine and you do not recognise the right of Israel to exist ... ”

The ACDP's Kenneth Meshoe criticised Ramaphosa for taking sides and for refusing to condemn the more than 3,500 rockets fired from Gaza into Israel's densely populated residential areas.

He said it was hypocritical that some in the international community, including SA, would condemn Israel in using its air power in response to rockets fired by Hamas and their associates towards Israel.

“We would also like to affirm Israel's right to defend itself against any foreign aggression,” he said.

Responding to the debate, Pandor said the government and the ANC have always supported a two-state solution in the Middle East.

“We will not desert Palestine nor their search for freedom. This does not in any way have an anti-Semitic intention of creating an impression that we are against the existence of the state of Israel,” she said.

Students and residents take part in a night vigil, 18 May 2021, at the University of Witwatersrand in Johannesburg, for a solidarity picket organised ...
News
4 months ago

The cabinet on Thursday issued a scathing attack on Israel, accusing it of violating international law with its recent actions in Palestine.
Politics
4 months ago

Palestinian protesters and Israeli police have been clashing daily in and around Jerusalem’s Old City, home to major religious sites sacred to Jews, ...
News
4 months ago