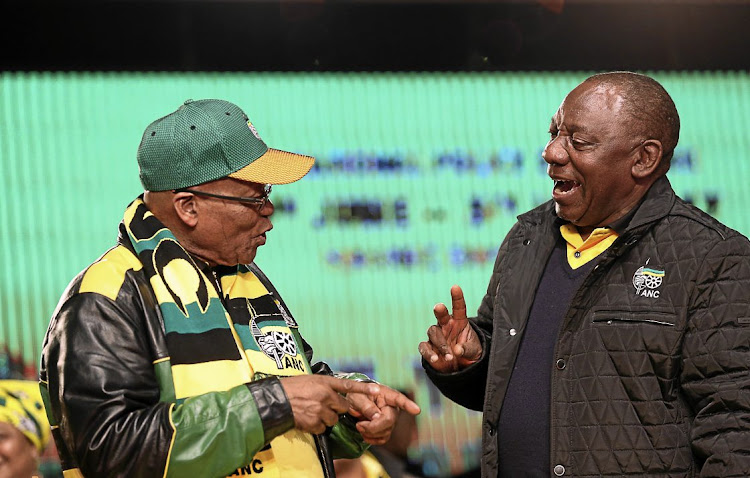 President Cyril Ramaphosa (R) has called for calm in KwaZulu-Natal amid protests by residents who took to the streets after the jaillig of predecessor, Jacob Zuma (L).
Image: Masi Losi

President Cyril Ramaphosa has condemned the violence playing out in KwaZulu-Natal during the protests against the incarceration of his predecessor, Jacob Zuma.

A statement from the presidency on Saturday said the reasons being advanced by those protesting against the jailing of Zuma “cannot be used to legitimise vandalism and public violence”.

Groups clad in ANC regalia who described themselves as supporters of Zuma blockaded freeways such as the N3 and the N2 on Friday, burning trucks in acts of economic sabotage. Ramaphosa said such conduct also amounted to undermining the rule of law.

“President Cyril Ramaphosa has called on communities in KwaZulu-Natal to desist from undermining the rule of law and inflicting damage on the economy.

“President Ramaphosa says the impact of public violence against the road freight industry and damage to freeways that serve as economic arteries will be felt also by the people organising and committing these crimes.

“The president says the reasons allegedly advanced for the violence in KwaZulu-Natal cannot be used to legitimise vandalism and public violence.

“The constitution protects the right to protest but protests cannot be abused to break the law or to destroy property and threaten livelihoods.

“Criminal elements must be met with the full might of the law. The president therefore commends the SA Police Service for their efforts to quell violence.

“The president endorses the call by KwaZulu-Natal premier Sihle Zikalala for calm in the province and for citizens to express themselves within the bounds of the law.”

KwaZulu-Natal paramedics from the VIP medical services had to alter their route on Friday when a group of protesters believed to be part of the “Free ...
News
10 months ago

The KwaZulu-Natal government has called for calm amid growing threats to shut down the province through violent protests over the incarceration of ...
Politics
10 months ago

The KwaZulu-Natal government pleaded for calm on Friday amid protests believed to be part of a violent “Free Jacob Zuma and shut down KZN” campaign.
News
10 months ago