Another Olympic record for Tatjana Schoenmaker 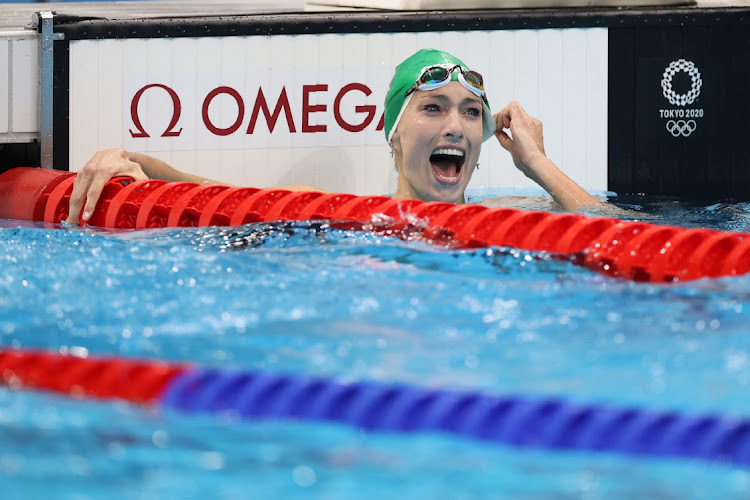 Tatjana Schoenmaker set her second Olympic record of the Tokyo Games as she torpedoed through the 200m breaststroke heats in 2min 19.16sec on Wednesday night.

She obliterated American Rebecca Soni’s 2:19.59 Games mark from 2019 and was just five-hundredths of a second outside the eight-year old world mark‚ and as soon as she saw her time on the results board she beamed and then shed a few tears.

“At trials [in Gqeberha in April] I swam a massive PB [personal best‚ of 2:20.17]. I was just hoping if I can come close to my time again‚ because it was such a good race‚ I think I would have been happy with that.”

Instead she took more than a second off to post what now ranks as the second-fastest swim of all time; only Denmark’s Rikke Pedersen has been quicker‚ going 2:19.11 at the 2013 world championships in Barcelona.

“I heard my coach [Rocco Meiring] screaming‚ ‘am I going too slow? am I?’ so hard‚ I never know‚” said Schoenmaker‚ nearly three seconds quicker than her nearest rival‚ Lilly King of the US in 2:22.10.

Russian Evgenila Chikunova was third quickest in 2:22.16 and then Schoenmaker’s training partner‚ Kaylene Corbett‚ posted the fourth best time of the heats‚ 2:22.48‚ a massive personal best.

“I think I was motivated after seeing my teammate swim a massive PB and make the semis ranking fourth‚ so she must be over the moon.

Corbett‚ eighth at the 2019 world championships‚ was only the third SA swimmer in Tokyo to advance beyond the heats‚ after Schoenmaker and Chad Le Clos.

Birthday boy Matthew Sates became the fourth a few minutes later‚ advancing to the semifinals of the men’s 200m individual medley in 2:58.08‚ the 15th-fastest time of the heats.

Schoenmaker‚ who broke the Olympic record in the 100m breaststroke heats on Sunday‚ said she had felt jittery before her 200m race.

Schoenmaker slowed down in the semifinals and final of the 100m breaststroke‚ eventually taking the silver medal in that event.

But the 200m is her main race and she seems to be so dominant there it’s hard to see her dropping enough for anyone to overhaul her‚ although a world record would be nice as well.

“I am here and I leave it up to God to just do His will and if that means I get to get another PB then I’m really happy.”

Team SA is in sight of their first gold of the Games.

The women’s 200m breaststroke semifinals are set for Thursday morning (4.54am SA time) and the final on Friday morning (3.41am SA time).

Earlier‚ Erin Gallagher and Martin Binedell were second in their respective heats‚ the women’s 100m freestyle and men’s 200m backstroke‚ but neither was able to advance. ​

'Get the camel drivers': German official apologises over racist remarks

Patrick Moster, the sporting director of the German cycling federation (BDR), has been forced to apologise after he was caught on camera making ...
Sport
1 year ago

Reality hit Team SA hard and painfully in Tokyo on Wednesday with no medals coming in on what had once promised to be the most profitable day of the ...
Sport
1 year ago

The Blitzboks became Team SA’s latest high-profile casualty when they were eliminated from the medal hunt at the Tokyo Games on Tuesday.
Sport
1 year ago