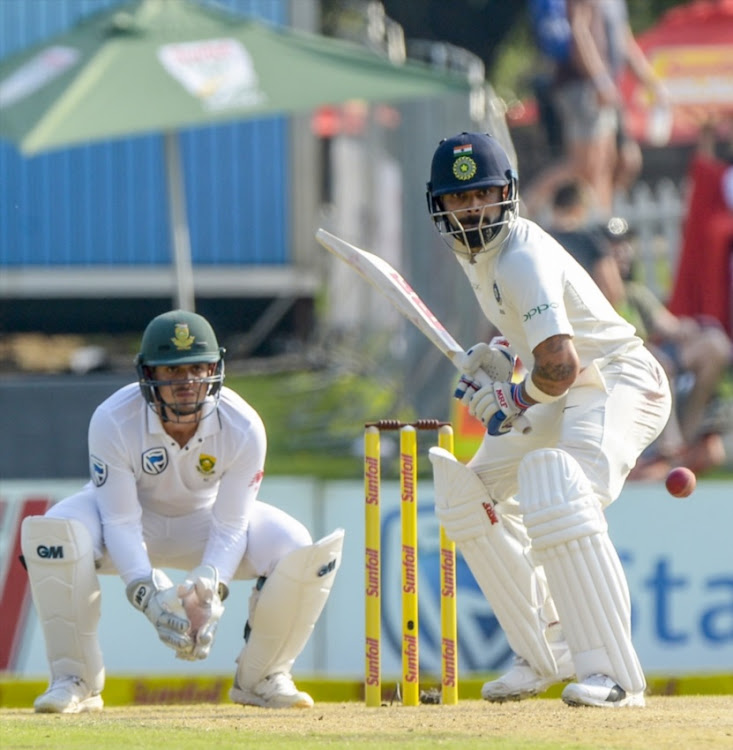 India reached 287/8 at lunch on day three of the second Test against South Africa at SuperSport Park in Centurion with their inspirational captain Vitat Kohli standing tall and unbeaten on 141.

India trail by 48 runs but Kohli and his partner Ishant Sharma‚ who is yet to score‚ will be hoping to add significantly to the scoreboard in their mission to surpass South Africa’s first innings total of 335.

To illustrate India’s aggressiveness on Monday morning‚ they trailed South Africa by 152 runs at the close of play on Sunday‚ with Kohli on 85 and Hardik Pandya on eleven‚ and they added 104 runs to their overnight score.

South African bowlers initially toiled in the opening stages but they found their rhythm and went to lunch with some momentum after they managed to remove Hardik Pandya‚ Ravichandran Ashwin and Mohammed Shami.

The first to go was Pandya‚ who was run out by Vernon Philander on 15‚ after he failed to ground his bat or his foot and shortly after the new ball was taken.

Then‚ Faf du Plessis produced a good catch at second slip from an edge by Ashwin‚ who was making good progress with Kohli on 38‚ from the bowling of Vernon Philander shortly before lunch.

The last wicket of the morning came when Shami was caught at slips by Hashim Amla from the bowling of Morne Morkel.

Though Proteas managed to get three wickets‚ the first session belonged to Kohli who became the second Indian player to score two or more hundreds in South Africa after Sachin Tendulkar who has five to his name.

Since the morning‚ Kohli has been at his dominant best on the crease with his attacking shots and he has scored six boundaries.